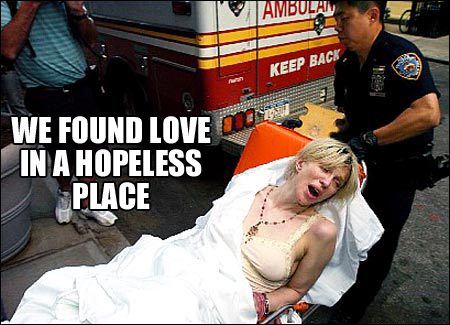 Idea: A mash-up of Frank Ocean's "Bad Religion" and George Michael's "Faith." It sounds feasible in my head.

Frank Ocean should perform "Pink Matter" at this year's MTV Video Music Awards with Andre 3000 and Prince (on guitar and additional vocals).

Former White Lion and Megadeth bassist James LoMenzo and his manager will be a team on The Amazing Race 21.

Lionsgate's marketing department should organize an exhibition game between the Expendables and the Dream Team.

NBC should fill the time slots of all the new fall shows it cancels with beach volleyball.

Do Subway ads in other countries feature Olympic athletes too?

The inexactness of self-serve frozen yogurt drives me mental. Yogurt dispensers should count ounces like petrol pumps, and you should be able to add toppings with measuring spoons and/or with your cup sitting on a weight scale.

Idea: A pacemaker-like device that remotely destroys your hard drive(s) when your heart stops beating.