"I'll tell you this: as for the top four ideas of all time, Jews are four for four. Jesus, Marx, Freud, Einstein. And that's why I converted." [114]

I just finished reading Busy Monsters by William Giraldi. It's a fair to middling picaresque elevated by Giraldi's linguistic dexterity.

Baffled, I dipped pita bread into my hubris and then declared that hummus was the fatal flaw that got Agamemnon stabbed in his bathtub. [38]

Groot had sense enough to leave me be, not offer aspartame platitudes. [248] 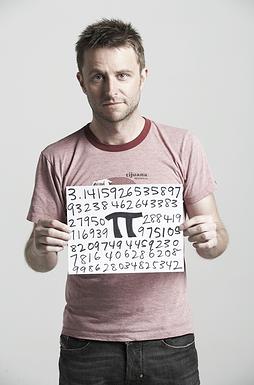 This photo of Chris Hardwick…

I know he founded the Nerdist empire, but…a sheet of paper with pi on it? He's thinking, "This is fuckin' stupid."

I run hot and cold on Chris Hardwick. Solo — introducing Nerdist podcasts, announcing Walking Dead hashtags — he is excruciating to me.

It tickles me that Chandler Riggs (Carl on The Walking Dead) operates Minecraft and DayZ servers and uploads videos of him playing zombie video games to YouTube, including, yes, Telltale's Walking Dead game.