Previously on Adam Riff™ (July 2015):
In less than a year, I have moved someone else from New York City to San Francisco, and then from San Francisco to Los Angeles, packing and unpacking all of his stuff by myself. 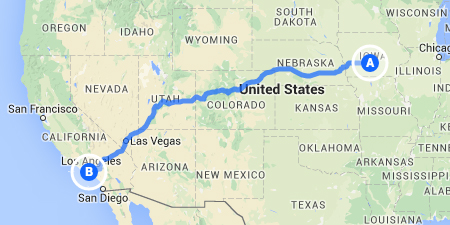 While in Iowa, my boss decided to move again, this time into the penthouse of his current building.

Boss Pepe: Jon, you moving me will be your birthday gift to me.

My work staged a film festival this past weekend in Iowa, timed around the caucuses next week.

I spent the bulk of it changing plane tickets for panelists because of stupid Winter Storm Jonas.

Demián Bichir and Chris Weitz somehow agreed to be panelists. The former plays Señor Bob in The Hateful Eight. The latter wrote the screenplay for Star Wars: Rogue One.

I was tasked with picking up Demián from the airport.

I try calling him. No answer.

I scan the baggage claim area and spot him chilling alone on airport seating, casually eating an airport market crudité.

He was wearing black skinny jeans.

Another panelist was Maeve Higgins, an Irish comedian whom I had never heard of.

I knew that she flew in from San Francisco, but learned while chatting with her that she was in San Francisco for StarTalk Live at Sketchfest…because she co-hosts StarTalk with Neil DeGrasse Tyson.

How did we book these people?!

The night before his arrival, I had to rebook his travel completely because his seats were not in first class.

Co-worker Marin: It's not him. It's his management. He just acted in an Ang Lee film… The optics.

The second leg of his flight to New York City on Sunday morning is cancelled. Delta rebooks him on a direct flight arriving on Monday at 11:30, but he has an important meeting on Monday morning that he cannot miss.

I scramble to find a way to get him to New York City by Sunday night.

Okay! Des Moines to Boston via Minneapolis, and then Boston to LaGuardia, with an Acela ticket from Back Bay to Penn Station as a back-up.

The only problem: First class seats are sold out on the flight from Minneapolis to Boston. The best I can do is an aisle seat in coach.

Arturo: [while glowering] I have to be in first class on that flight! I have to! It's the longer one!

I kept waiting for him to go, "Nah, I'm just fucking with you," but he never did.

Jeez. It's just two hours and 40 minutes… [grumbles] Back to the drawing board.

Guh. Who is calling me at this hour?!

"Hello! This is a callback from American Airlines for…Jonathan Yu."