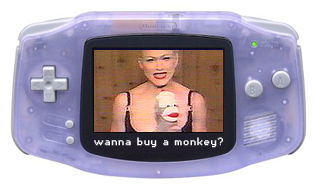 Bringing a 1993 Hong Kong movie to America is the best thing Quentin Tarantino has done in a long time. I saw Iron Monkey tonight. I've seen the movie before, just not in a theater via a restored 35mm print. You can't grow up Chinese without learning the story of the Iron Monkey and his protégé Wong Fei-Hong. What can I say though? The rerelease of Iron Monkey is one my favorite movies of 2001. Director Yuen Wo Ping (the same guy who choreographed the fight scenes in The Matrix and Crouching Tiger, Hidden Dragon) gives the audience what it wants and nothing more, eschewing the arty pretense of Ang Lee in favor of a generic plot, silly comedy, and relentless action that surpasses any martial arts you see in movies today. I recommend.

Oh, and then there was Limp Bizkit. Jesus ranch, the shit finally hit the fans. Limp Bizkit and Wes Borland have amicably decided to part ways. Both Limp Bizkit and Borland will continue to pursue their respective musical careers. Both wish each other the best of luck in all future endeavors. Let's not kid ourselves. There was nothing amicable about the split. We all know the real reason why Wes left the band… 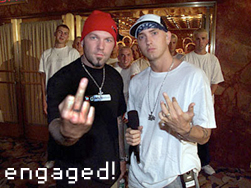 I gotta stop using pictures in my posts. Any more pictures and I'll be Jord. Which reminds me… I have acquired the BRAND NEW WankerCounty button. Whoo! It's blue like your balls and the blue ball go down the hole in that Tiny Toon Adventures episode. What the fuck did I just write? Eh. Anyway, check out the swanky new Wanker blue button. It's the latest addition to my gallery of kickass buttons and/or key elements of a special event post "in the works."

Finally, Jonathan Yu's Survivor diet project has encountered some technical difficulties. For one thing, each episode spans a mere three days, so there's no possible way I can follow the diet strictly and continuously. Also, I'd really like to be able to, well, shit. Thus, I've decided that every post-Survivor Friday, I will make like I'm in Africa. The rest of the week, however, will be devoted to keeping my bowels in check. And for the record: yes, I only ate cherries and beans today. Nummy.