Whoo! I got a fanpic! 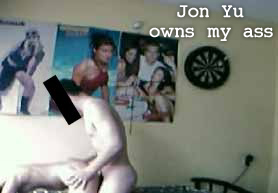 Wait. That kinda looks like my room at home. Jesus ranch! MOM? Oh, for crying out loud! That's just wrong. And who is that man? Is that Winston's piano teacher? Good lord…

I guess it's true what they say: "Women are like dog doo here me through don't interrupt. It's just the older that they are the easier they get to pick-up."

When you have writer's block, resort to posting the lowest common denominator. 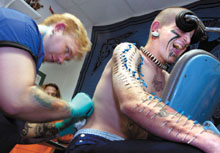 Mike Smith screams as he is pierced with his 87th needle by 3rd Dimension Tattoos and Piercing co-owner Burt Terrien as Smith goes for an unofficial record for the most piercings in one sitting. Smith surpassed the world record with a total of 132 piercings.

Known to friends as "Freak Show Mikey," the 19-year-old has 15 permanent piercings, including "flesh tunnels" in each ear that hold discs about an inch in diameter, and a so-called "Prince Albert" in a very delicate part of the male anatomy.

Prior to his ordeal, Smith estimates his body had been pierced between 55 and 60 times, with most holes allowed to heal over.

"After a while, normal piercings didn't do anything to me," he said. "I'm taking it to the next level."

Smith also bears 13 tattoos, including on his face, and a brand burned into his chest that reads: "Tribal." full story

Dude, he's 19 years old. I'm 19 years old. Why am I going nowhere slow in school while he's making news for being a dumbass? It's not fair. I'm a perfectly good dumbass too! Somebody write about me!

I forgot to note in yesterday's post how frustrated I am with Sum 41. The band members are barely older than me, but thanks to MTV and one blatant Beastie Boys/Blink-182 hybrid fluke, suddenly they're bona fide rock stars. Hey, I can write three note songs about being a rebel loser in love, rap, and suck live. Where are my teenybopper fans? Why am I not getting wasted every night and acting like a lovable retard on television?

Would you fuck this man? Apparently, lots of people would, so many that somebody actually made a documentary about him.

"Ron Jeremy isn't really what you'd call easy on the eyes. Some would even go so far as to say he's unattractive. Yet he's one of the most popular stars in the history of adult film. His fans call him the 'Hedgehog.' He's short, fat, and hairy. And he's paid very well to have sex with thousands of beautiful women. Some people would call him the luckiest man in the world."

Fuck me! It's a three day weekend! I've never loved veterans this much. One, two, three. Can you smell what I'm cookin'?

This poll is for all the fat chicks! Woooooo!