I was at lunch today when I noticed that the Rieber dining hall had these: 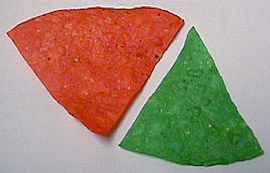 Does anybody else find red- and green-colored tortilla chips just a tad disconcerting? I mean, blue chips make sense, because blue corn actually exists. I can't say the same about saturated red and green chips. Never seen any bright green corn in my life. I guess I just don't understand the appeal of colored food. I'm sorry, but soul food tastes like shit. Plus, the increasing dependency on the use of unnatural dyes to sell pre-processed food products kinda scares me. Take Gatorade, for example.

Now that is one odd shade of blue. Is it cool? Yes. Would I drink it? No. Why? Because it's blue water. Contrary to popular belief, water is not blue. Likewise, real grape juice is not dark purple. Whoever decided that everything flavored grape should be tinted dark purple deserves to be shot. Seriously. It's embarrassing for me to show women my dark purple dick! Oh and what about this? 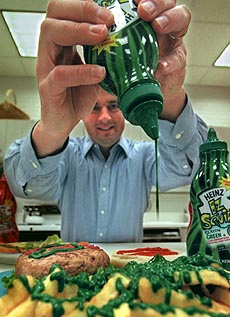 Mmm…green ketchup. You know what that be good on? My dark purple dick. Yee. Add a black light and I have me my own personal rave. [pause] All this talk about dicks food makes me hungry. What is there to eat? 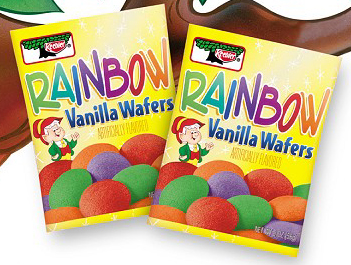 I dropped my CD player off the theater balcony today and it broke. :D

Paul: I enjoyed it.
Paul: It was delightful.
Paul: You need to have read the book to appreciate it.
Paul: It's funny how they teased romance between Harry and Hermione because Harry goes for Cho Chang instead in book four and Ron and Hermione end up together. Yes, Ron and Hermione!!!
Paul: Judging by the first one, I'm not gonna like Attack of the Clones.
Jon: …

Okay, so I didn't read the book. Fuck off. The mark of a good movie is its ability to stand on its own, and while Harry Potter and the Sorcerer's Stone isn't particularly awful, I felt like I was watching Fast Times at Hogwarts Castle. The movie's strange chronological procession debauches any semblance of an absorbing storyline, resulting in numerous plotholes and the most underwhelming climax this side of my masturbatory sessions. I figure that Warner Bros. has seven movies (ugh) to explain it all, but I never expected Sorcerer's Stone to be such a half-assed effort. For God's sake, director Chris Columbus rips off a Marines commercial for the ending sequence. How's that for cheating?

What's more, in an effort to release the movie while the product was still hot, Warner Bros. contracted seemingly every visual effects studio in the world to work on Sorcerer's Stone when they shoulda spent their money on glaucoma treatment. Might as well of had the Japanese Godzilla filmmakers in charge of visual effects – that's how cheesy-looking the movie was to my eyes. The Quidditch match looks like a home movie compared to the Phantom Menace pod race, which it shamelessly rips off, by the way. Not only does the Quidditch stadium barely pass for substandard computer generated imagery, I also didn't see kids flying around on broomsticks. No, I saw kids pretending to fly around on broomsticks in front of a green screen while a wind machine blows wind in their hair. Oh well. With George Lucas' Industrial Light and Magic signed on as the sole visual effects studio for the second movie due out next Thanksgiving (whoo), let's hope that Chamber of Secrets doesn't suffer the fate of its predecessor and come off visually as the retarded half-brother of The Mummy Returns.

Speaking of Lucas, did I mention that I saw the second trailer for Attack of the Clones? My pulse skyrocketed to levels that can't possibly be good for my blood pressure during those two euphoric minutes. In fact, I created quite a scene on that balcony. Good thing restraining orders take at least a week to put into effect. Goddamn, I wanna see this movie. Goddamn, I wanna see Natalie Portman in my room in five minutes. Say what you will, but I'm proud to be an uncool Star Wars dork loser. Tell 'em, R2. *beep beep beep-beep; beep beep beep* 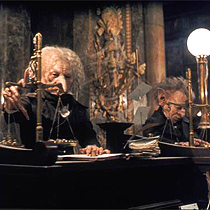 The latter characters, called "gringotts," operate a bank, and are depicted as smart, irritable, hairy, large-nosed midgets. Yet, the Jews love Harry Potter.

Alas, nothing I say will prevent Sorcerer's Stone from making a shitload of money. The lamest movies always make the most money. Why is that? I think I'm-a film paint drying for two-and-a-half hours, title it The Bible, release it in theaters, and then go buy me a platinum Millennium Falcon. Bling bling. Maybe I'll have it painted hot pink too.