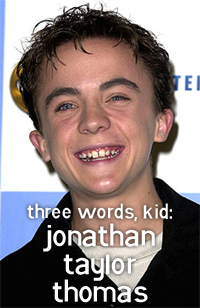 I could be at a private Rolling Stone Ryan Adams show at the Troubadour right now, but I'm tired as fuck after basically staying up all last night shitting out a paper. And look, I have another paper due on Friday! Weeeee!

Man, I've yet to write a good paper in college. In fact, I don't think I've ever written a paper that I was satisfied with. Maybe it's the fact that with the disappearance of the rough draft and peer editing in college, one night papers obviously won't be very good. Or maybe it's that I'm just not good at supporting theses and dealing with formal English shit. Regardless, you read any one of my papers and I guarantee it'll become worse and worse with every page, devolving quicker than a rushed in-class essay. You can actually graph my writing motivation level by labeling the x-axis "paragraph number" and the y-axis "quality."

I had a Peter Gibbons moment today. I don't like school and I don't think I'll try anymore. I really don't like writing papers and, uh, I'm just not gonna try. I never really liked reading textbooks. I don't think I'm going to do that either. Save me some money.

10 weeks of German movies at 9:00 in the morning. Whoo. I wanted to take a class on the Third Reich and the Jews, but it was full already, so I opted for the next best thing. I'll have Wednesdays off. I want more days though. [sigh] Oh well.

Why do sequels traditionally fail, yet World War II made much more money than World War I?

I saw The Godfather on the big screen in film class today and for the first time watching the movie, I jolted when Michael is in the hospital looking for his father and out of nowhere, a nurse pops in and says, "What are you doing?" Coppola plays so much better on the big screen.

Harry Potter and the Sorcerer's Stone director Chris Columbus has made an apology to Michael Jackson. On a U.S. television show, Columbus commented that he wouldn't allow young actor Daniel Radcliffe, who stars as Potter, to accept any phone calls from Jackson. Columbus, who also directed Macaulay Culkin in Home Alone, has since clarified his statement, saying, "I don't want Jackson to think I'm slamming him. What I meant by that is you don't want Daniel to get caught up in the cult of celebrity." It sounds like there's something else Columbus doesn't want young Radcliffe caught up in.

In what seems to be her continued effort to get the Spice Girls' wheels a-turning once more, Baby Spice Emma Bunton, whose solo album, A Girl Like Me, hasn't exactly been a chart-topper, now says she's been speaking with Spice Girls Mel B, Melanie C and Victoria Beckham about the possibility of touring in 2006. Don't hold your breath; you most certainly will die.

Nominees for the 28th annual People's Choice Awards have been announced. A nationwide Gallup poll nominated, among other things, Jason Alexander for his canceled ABC sitcom Bob Patterson. Tom Hanks and Mel Gibson are once again up for Favorite Movie Actor – even though neither of them appeared in a film this year. And Pearl Harbor and The Fast and the Furious are both nominated for Favorite Motion Picture. The category of Favorite Female Television Performer includes Jennifer Aniston, Calista Flockhart, and Oprah Winfrey (for her role as, um, Oprah). Music nominees include Britney Spears, *NSYNC, the Backstreet Boys and Garth Brooks. What…the…fuck. That's it. No more polling in the midwest.