The following is a public service announcement.

Pants slightly too big and don't have a belt? That's fine. However, I'm sick and tired of seeing these kids with their pants deliberately around their lower thighs…especially when they're wearing a belt! And then there are the geniuses who inexplicably sag pants that have elastic waistbands or sag shorts so they look like pants. What. The. Fuck. Let me break it down for all you retards: the underwear goes INSIDE the pants. That's why it's called under-FUCKIN'-wear! I don't know about you, but I like to wear my pants, not sit on them. Why anybody would pay full price to wear half a pair of pants is beyond me. The only time your pants should be that low is when you're jackin' off.

I updated the periodic table. While The Marked Fool and Absent-Minded are on holiday, go gawk at #13 Foul Magazine (J.R. says it's "NOICE") and #31 Hamster Style, which, according to Adam, should re-launch Tuesday. 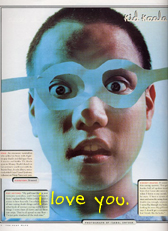 on stage in his pajamas, my boy burned serious vinyl, first rockin' the house with a 20-minute solo set of dance music culminating in sir mix-a-lot's "baby got back" and then rockin' the house with lovage
bonus: after the show, we were waiting for the bus to come when hugh hefner walked right past us, inebriated and accompanied by five well-endowed blond women