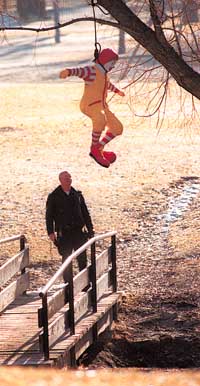 Ronald McDonald upon hearing the news

Well, at least he died of cancer and not a heart attack, because the last thing I want right now is to feed the fire of those stupid fuckin' health nuts who insist that fast food will kill me. Yes, I know that. So will guns, but guns aren't tasty and 99 cents for a limited time.

It's so fuckin' hot in Los Angeles. Just wanted to rub it in the faces of all you snow people.

I'd talk about how school is except that I don't have enough space to thoroughly document how electroshock therapy works.

And now, thoughts I had while waiting for the movie to start:

Do teenagers really get that excited about drinking Sunny Delight?

Goddammit. I have a pimple on my ass.

In the time it takes your enemy to open up a can of whoop ass, can't you just shoot them in the head and be done with it?

Jesus seems to love a lot of people. Are we sure he isn't Mormon?

If a giant walking and talking pitcher of red sugar water suddenly barged through a wall of my room with a complete disregard for structural damage, I would not be happy.

Why is the smallest available size in any urban clothing store always XXL?

One day, all biology majors will be required to take a class on Owen Wilson's nose.

Wouldn't it royally suck to be a male hand model who can't get dates?

Remember how they used to say "if you put your ear up to a seashell, you can hear the ocean"? What a load of shit that was.

6
blade II
re: blade harder. the reaper, a new breed of vampire that feeds off humans and vampires alike, emerges with plans of world domination. in order to defeat this new menace, blade must team with the bloodpack, an elite group of vampires trained to hunt him
jon says: uhhh…i attended one of the first screenings of the movie and had to sign an agreement not to discuss or transmit information about it on the internet. i.m. or e-mail me if you want particulars or have questions
rory says: the bad guy novak looks like mr. blingo, if he was a corpse wearing normal street clothes. nate's really scary-looking as it is in real life, so you can imagine how scary he'd be as a corpse. doubly scary. i, for one, would hate to get on post-mortem blingo's bad side
jon: rory! shut the fuck up! you signed an agreement to—
rory: no, i didn't. "adolf maweeny" signed an agreement. hehehe.
jon: you're shittin' me…
rory: hey, you're the one who pointed out the dead blingo resemblance. if i didn't not sign that agreement, nobody would know about it until march.
jon: [sigh] you've made a cuckold of me.
rory: damn right i did. [long pause] wh-what's a "cuckold"?