This is David.
Together, they are…

Who are Bob and David? Well, Bob Odenkirk and David Cross are the men behind pay television's funniest sketch comedy show ever. This was the show that gave birth to Tenacious D. I'm talkin' about HBO's

Why should you care? Because HBO has decided to release all the Mr. Shows on DVD. Whoo! Each disc will contain ten episodes and include extras. The first disc is due out on February 27th. It will consist of the four original episodes of "season" one and the six episodes from the second "season."

But that's not all! The Mr. Show movie finally hits theaters on April 12th. Awww yeah… Run, Ronnie, Run traces the trials and tribulations of white trash man Ronnie Dobbs, an alleged criminal notorious for his multiple appearances on the TV show Cops. Besides Mr. Show alums, the film also boasts appearances by Nikki Cox, Jack Black, the Kids in the Hall, Trey Parker, Matt Stone, Andy Richter, Scott Ian, Maynard James Keenan, Patrick Warburton, Jeff Goldblum, Garry Shandling and Ben Stiller, among others. I saw a screening of the movie about a year ago and it was devastatingly funny. How can you resist Jack Black in a Fiddler on the Roof parody doing a song and dance number with the chorus "just give her a nice kick in the cunt"?

Family Guy and Futurama are on DVD…with region 2 encoding! What's up with that? 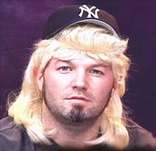 And what the fuck is going on here?
I guess Lethal's the man in the relationship. 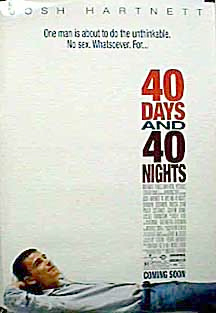 Have you seen this poster for an upcoming Josh Hartnett movie? It says, "One man is about to do the unthinkable. No sex. Whatsoever. For…40 Days and 40 Nights." Ugh. Look at him lying there with that smug look on his face. He's probably thinking about his dick and how much girls want to get their hands on it. So Josh Hartnett can't have sex for 40 days. BOO FUCKING HOO! [sigh] I'm sorry, I just have some personal issues with this movie. The first draft of the script was actually based on my life until Miramax decided that it would be impossible to market a movie called Ever.

7
brotherhood of the wolf
re: in 18th century france, the chevalier de fronsac and his native american friend mani are sent by the king to the gévaudan province to investigate the killings of civilians by a mysterious beast
jon says: the movie does not make any sense whatsoever and the action sequences are "been there, done that" for the most part, but if you have two-and-a-half hours of time to kill and are in the mood for campy b-movie period drama and excessive gore and violence (including scenes of what some people might deem animal cruelty), then this inexplicably entertaining crouching tiger + jurassic park hybrid is for you. oh and it's in french, so be ready to read subtitles
rory says: ahem. you forgot to mention the naked women. crazy french people…