"what is a regis philbin?"

Well, fuck. Now that Mr. Wilcox has effectively raped my comedic arsenal for the next two weeks, I'm stuck with poster's block (a.k.a. Robotskull syndrome). I think it's time we have another lightning round. Wake up the kids, people, because you are about the witness America's fastest growing post sensation! Here's how it works: I must make a post today in just two hours, a quarter of the time it usually takes me to make a post. Plus, this particular post must incorporate a theme ingredient.

Didn't the first guy who wore a sombrero realize it was completely impractical when eating pussy? 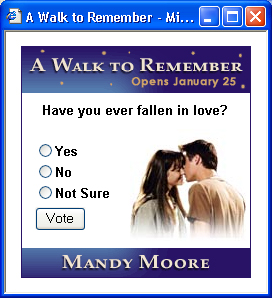 Pop-up ads have hit a new low. How can you not be sure if you've ever fallen in love? Then again, I bet a lot of people have fucked Courtney in drunken stupors.
Note: Pretty ugly girls ruin teen movies. It just doesn't happen in high school, not even on Boston Public. Let's be honest. Ugly girls in high school are ugly, before AND after prom, and Ty's hair looks like a funky toupee. 'Nuf said.

Do you think that maybe Arnold Schwarzenegger really isn't tough at all and just named his penis "the law"?

You know what'd be delightful? If I got to look up a cheerleader's skirt beforehand.

[sigh] When will they make ramen extreme?

Indiana Jones is definitely coming back for a fourth installment. A spokesman for Steven Spielberg confirmed Tuesday that the director and fellow Indiana Jones mastermind George Lucas have come up with a story, and Harrison Ford has agreed to reprise his famous role in Indiana Jones and the Comfortable Mattress. Obligatory aegis to Colin.

You know how people have personal gardeners and personal maids? Well, when I grow up, I want to have my own personal DJ so that whenever I feel like rockin' out, say, after a long day at work, my DJ will be there to give me aural pleasure. Moreover, if ever I need someone to watch the kids (stop laughing), I can leave them with my DJ, have him play some children's music, maybe give 'em a few rides on the wheels of steel.

Things That Are Confusing
Jon Yu | Jiyeon Yoo | Jon W. | John Woo | John Q | St. John's U | Ja Rule
Respectively, me, a TA for my English class, the wanker who stole my content mojo, a popular action movie director, a laughably absurd February movie where a poor Denzel Washington takes a hospital's emergency room hostage until doctor's agree to perform a heart transplant on his dying son, an institute of higher education in New York, and a hotshot rapper who collaborated with Metallica on a track for an upcoming hip-hop compilation record.

8
metropolis
re: in the dystopian future, the "workers," led by the beautiful maria, plan a revolt against the aloof "thinkers" that dominate them
jon says: incredible art direction and brave new orwellian storytelling transcend 1927 filmmaking technology to yield the poli-sci-fi movie to end all poli-sci-fi movies before any poli-sci-fi movies were produced. blade runner ain't got nothin' on this flick and i sound like the movie critic for telemundo
rory says: hey, the box says "there can be no understanding between the hands and the brain unless the heart acts as mediator." you know where i'm goin' with this…

Oh shit! I forgot about the theme ingredient. Bear, bear, bear… I need a fuckin' bear! Where am I gonna get a bear at this ungodly hour?