I have no shame. This weekend, I paid good money to see both Collateral Damage and Rollerball.

The big thing in 2005 is a violent sport which can have some pretty serious consequences…like dying.

Update: I forgot to add in the Rollerball review that in order to get a PG-13 rating, the producers visibly dubbed over the word "fuck" twice. In fact, the movie release was delayed from last August in order to re-edit what would have been an R movie into a more profitable PG-13 movie. The result, however, is a B movie. Dubbing? How airline-ish. Talk about unprofessional. Nothing like seeing Jean Reno ask "are you fooling with me?" when his lips suggest otherwise.

If you didn't know already, a PG-13 movie can have all the "shit"s in the world but only one "fuck." As a result, producers usually save the one allotted "fuck" for a special scene.

And now, thoughts I had while waiting for the movie to start:

Every Hollywood project about Hispanic people always has Edward James Olmos in it. What's up with that?

Hip-hop artists are the only people who put their own records on their year-end best-of lists.

Somebody should make a counterpart to SmarterChild called DumbassGeezer and program it to carry on intelligent conversation with people.

To all you urban fucksticks who insist on blasting your car stereo so that everybody within a 10-mile radius can hear it: why not opera?

Weathermen have the easiest job in the world. They basically get paid to 1) describe what's going on and 2) guess. Heavy rain outside because…it's really wet…and our computer pictures show the big blue swirly thing not moving so…you can expect rain again tomorrow! At least being a stock market analyst entails some knowledge of economics. You want a forecast? I'll give you a forecast. Sky's gray? It's gonna rain. Bright out? Wear sunscreen. 'Nuf said.

What exactly is meant by the term "flying fuck"? And why are people so averse to giving 'em? Has the mile-high club lost its appeal? Is that it? I'm confused.

When will Warner Bros. pull their head out of their corporate ass and start packaging their DVDs in industry standard plastic cases instead of that awkward cardboard bullshit?

Whenever I hear the name Tara Reid, I picture her on all fours barking like a dog. I don't know why.

You know those speed limit signs that say "regulated by radar"? Where is this radar? Because if it actually exists, it's doing a poor job. Hell, I should know. Oh and I love it when the sign says "speed detected by flying aircraft." Yeeeah. 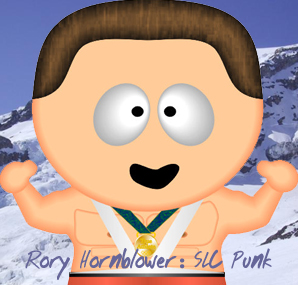 Jon: Hey.
Rory: Yo.
Jon: What's up?
Rory: Nothing.
Jon: Cool.
Rory: Heh.
Jon: Okay, this is degenerating into a bad AIM convo. You want me to put emo lyrics in my profile?
Rory: Sorry. It's the lack of coffee.
Jon: Ah.
Rory: I have a question. Why did they build an outdoor stadium for the Winter Olympics when all the events take place either nearby or indoors?
Jon: I dunno. For the opening and closing ceremonies?
Rory: That's American ingenuity for ya.
Jon: …
Rory: So now then. Each night during the Olympics, a different musical act will perform after athletes receive their medals in the downtown open-air Olympics Medals Plaza. Saturday night, Dave Matthews Band played at the opening of the plaza and before their set, I got to talk to…uh…uh…what's-his-name…
Jon: Dave Matthews?
Rory: Yeah. I talked to Dave Matthews. You know, Dave Matthews is nicknamed Mr. Anus because of his love of toilet jokes.
Jon: Oh? He told you that?
Rory: No, Pop-Up Video did. But I still talked to him! Roll the footage.

Dave Unto the Joy Fantastic

Rory: Hello, Dave.
Dave: Hi.
Rory: How's Utah treatin' ya?
Dave: Good. It's a bit chilly.
Rory: Yee. Why does your bland banal Glen Ballard yuppie stoner jam rock make me wanna Van Gogh my ears and retch all over them in a fit of cacophonic indignation?

[long pause]
Jon: Is this why—
Rory: Yup. Another black eye.
Jon: Well, at least you have matching black eyes now. With a little white makeup, you could be "Rory 2 Dope" to my "Violent J." Haha.
Rory: Shut it, arsehole.
Jon: Anyway, we'll check back in with you later. Rory Hornblower at the Olympics, everybody.