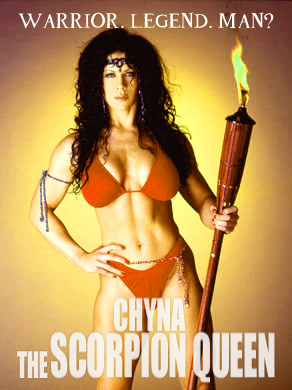 Thursday night, I saw a screening of The Scorpion King. I signed an agreement not to discuss or transmit information about the movie on the internet, but fuck it.

I enjoyed the movie. 90 minutes of B-movie fun. The Rock raises his eyebrow in one scene. The PG-13 action sequences bored me at times. A substantial amount of sexual humor. Lots of tit shots. Better visual effects than The Mummy Returns and its pathetic animated scorpion-Rock thing. Better acting from Rock too. The writer of The Scorpion King co-wrote Attack of the Clones, so that should be interesting.

I was waiting for the movie to start when I heard a girl yell "Oh my God! There he is! I love you Dwayne!"

Holy shit, I thought. He's here. The Rock is in the hizzouse.

I couldn't see him though because the lights were down.

Once the movie finished, I jumped outta my seat and frantically began searching for Rocky amongst the crowd of people leaving the theater. I had little light to work with, but sure enough, I found him…standing right in front of me. My first instinct was to grab him and ram my tongue down his throat. No, I thought, let's just tap him on the shoulder.

He turned around and said "What's up?"

The Rock looked at me and said "What's up?"

How cool is that?

Now living in Los Angeles, I see celebrities all the time and almost never get starstruck, but there's something about The Rock being next to me that made my heart pulsate faster than the time it takes me to orgasm. Not even Jord could do that. For once, I was speechless.

I didn't know how to respond, so I gave him a thumbs up.

I gave The Rock a thumbs up like a total fool.

Would you give Jesus a thumbs up? NO.

I somehow got outta the theater before The Rock and stood outside gawking at him as he made his way out. Some bystanders went up to him and shook his hand. I decided that I wanted to shake his hand too. I wanted to touch The Rock again. Hell, I'd stick my dick in his ass if I could, but I don't swing that way. At least, I don't think…

So I walked up to him, extended my hand and he shook it.

The Rock shook my hand.

How does one respond to a life-altering gesture like that?

All I could do was smile like an giddy schoolgirl.

He smiled back and that was that.

I met the most electrifying man in sports entertainment.

I wish I had the Scorpion King poster that Jord autographed on hand so that I could get The Rock to double its value. Oh well. I met them both in one week.

My life is complete.