While procrastinating Monday, I hit up Punogre (I refuse to call it "Armegro") and saw this. Now I dunno who Pikacheney (David Cole) is, but I do know that there's a photoshopped image of the MEHAP teacher from my high school on Punogre, and it's really freakin' me out. Why is Mr. Navarro on Punogre, of all places? Oi… Bad flashbacks of MVHS. 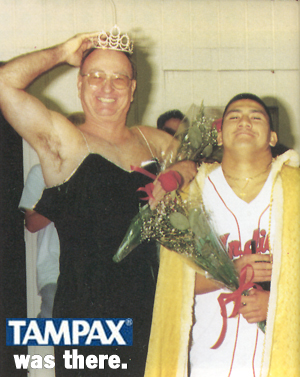 A high school dean of students should not piss off someone who has dirt on him and expect this particular someone to forget about it.

Black Bigot wanders through the aisles with his young son.

Black Bigot: Lookie here, son. Cocoa Puffs. You like Cocoa Puffs? I do. But why must I be CUCKOO for Cocoa Puffs? Frosted Flakes? They're grrrrrreat! But you gotta be crazy to eat Cocoa Puffs! The man says you gotta be funny in the head to enjoy that chocolate-y goodness!

Rice. Same thing. White rice is just white rice. Brown rice is just brown rice. But black rice is WILD! It ain't black; it's WILD! You see, the man insists on referring to it by its slave name!

And what about this? Green olives. Green olives…they come in glass jars. Look how pretty they are. Black olives, however, come in cans. Yes, the man feels the need to lock black olives up in tin cans and keep them in the dark, hidden away from public view. Hell, I've never seen a real black olive before! I only know what they look like from pictures!

So what did we learn today? The man believes that black people are wild and crazy and should all be locked up behind metal!