"my prophecy says you're dead"

I apologize for the current string of unoriginal posts. I've been busy. No, I didn't get a life; I got swamped with shit to do. Two books to read and 16 pages to write in the next seven days minus procrastination time. I wish I could freeze time like Evie on Out of this World. Sometimes there's so much work in the world I feel like I can't take it…and my heart is gonna cave in. [sigh] Fuck me. I'm screwed. I do it to myself though. 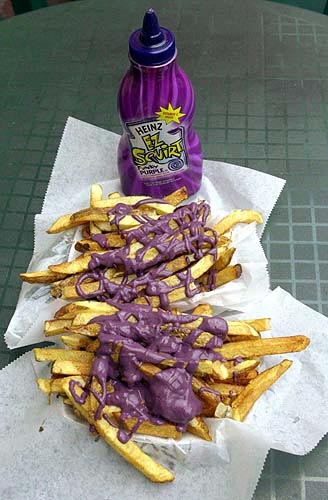 Heinz recently revealed its new product for kids: Heinz EZ Squirt Mystery Color. Three new colors of ketchup (Passion Pink, Awesome Orange and Totally Teal) will hit grocers' shelves nationwide next week, but children and parents won't have a clue what's inside the EZ Squirt bottles until they squirt it. If history is any indication, kids won't leave those bottles on the shelves for long. Heinz's most recent condiment coups, Blastin' Green and Funky Purple EZ Squirt, gripped the imaginations of children and have sold more than 20 million bottles since October 2000.

In other news, I also have a new product for kids: Jon Yu EZ Squirt Mystery Color. Four new colors of semen (Flaming Gray, Ku Klux Tan, No Name for a Puce, and Illegitimate Baby Blue that turns Mad Plaid when you add milk) are now available, but children and parents won't have a clue what's inside until they squirt it.

Hey kids! It's time for another… 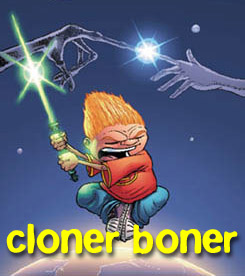 The posters have started showing up on college campuses across North America, advertising things like a "purple lightsaber for sale" and a "spacious summer sublet" on the watery world of Kamino. There's even a personal ad featuring Yoda that teases "little & green, seeking Zen". The sharply designed sites allow you to watch the Attack of the Clones trailer, download wallpaper and icons for your computer, and print your own copies of the posters.

The video for "Across the Stars," the love theme from Episode II, debuts Tuesday on TRL, the same day the John Williams movie soundtrack arrives in stores.

Three more weeks until Attack of the Clones tickets go on sale. The movie hits theaters Thursday May 16.