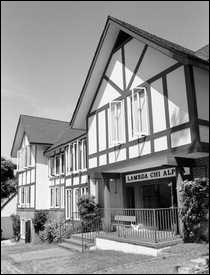 I live in an old frat house. Lambda Chi Alpha. A couple years ago, the frat's national board suspended its UCLA chapter indefinitely after two members drowned during a trip to Lake Mead.

The house has a communal kitchen with a communal freezer. Recently, I bought two pre-packed quarts of ice cream at Baskin-Robbins and stored them in said freezer. I had eaten about half of each container when I opened the freezer one day and found them both empty. Somebody had cleaned out my ice cream.

I considered buying a lockbox in which to store future frozen food purchases but figured that someone could just steal the lockbox. Besides, I didn't want to prevent this from happening again — I wanted revenge.

I went and bought a pre-packed quart of chocolate chip ice cream, ate some of it, inseminated the container and put it in the freezer.

Now before you start calling me a "sick fuck," note that many people around the world consume semen every day. And it's not like I have any sexual diseases to transmit.

I wish I had AIDS though!