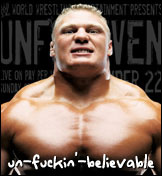 I decided that I like watching wrestling at Hooters. It makes me feel like a real…guy. When I'm sitting there at the bar, eating chicken wings, drinking pop, staring at tits, and vocally reacting along with all the other guys in the place, I forget, if just for three hours, that I'm really an unathletic, four-eyed, internet generation virgin who doesn't know shit about "real" sports or cars or anything else associated with Tim Allen. 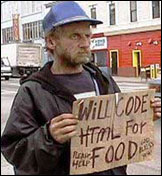 I was in Hollywood and saw a homeless person with a sign that read "Why lie? I need weed."

Okay, homeless people should not be funny. If you want my money, you better fuckin' beg me for it. You better look dead and have a somewhat believable story on your sign — "mom with two bastard children laid off please help God bless" — something more than "I need beer money."

I don't need to give homeless people my money and I certainly don't need to feel guilty about not doing so. Why should I feel guilty about their inability to look for work? I know that if I ever became homeless, the first thing I would do is get a job. Excluding freak accidents, there is no good reason to be homeless in this country. We have shelters to stay at and centers to help you get your life back on track. Plus, you can always choose not to adopt a drug habit.

"Shell shock" and "de-institutionalization" are no longer valid excuses. The Vietnam War is over. The Reagan administration is long gone. Natural selection would have weeded out the weak ones by now.

Besides, the homeless people I see usually aren't washed-up soldiers or mental cases — they're cheery motherfuckers! They come up to me and get all chummy chummy before going in for the kill. Hey, if you're so cheery and able to easily strike up intimate conversations with complete strangers, then why don't you walk down to the local employment office and put your people skills to use instead of loitering in my nice little village? Nice places are supposed to be nice partly because there are no homeless people around. Why can't y'all infiltrate someplace less nice? Like hell, for example.

One illegitimate Westwood citizen stands out in particular. His gimmick, if you can call it that, is that he can sing the song "Day-O" very loudly, and because he can sing this one song over and over, we should all give him money.

I swear, I am |     | close to donating a bunch of perishable goods to soup kitchens this holiday season.