wrestlepaloozer: [sigh] I'm so fucking sick of writing about Michigan.
Jram Royal: …
Jram Royal: YOU WILL CONTINUE TO WRITE ABOUT MICHIGAN
Jram Royal: AND THEN GO TO HELL 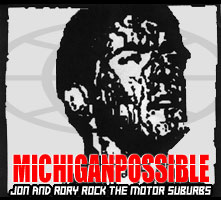 I can't believe we conned someone into driving us up and down 8 Mile just so we could say that we've visited a fuckin' road.

Dude, we didn't visit just any "fuckin' road"; we visited the Mason-Dixon Line of Detroit!

Looked like a fuckin' road to me. A big long boring stretch of pavement. I sure hope the movie of its namesake is a helluva lot more interesting. What say you, AICN?

"Several scenes of the movie take place in an underground club called 'The Shelter' where freestyle hip-hop battles take place (i.e. rappers are timed 45 seconds and whichever one disses (craps on) the other one the best with his skills is the winner, winning gives you street cred, street cred is supposed to get you a record deal)."

"There's also a bit where Rabbit [Eminem's character] comes to the defense of a gay guy, which is either an ironic gag or a blatant bit of spin control on Eminem's part (or I guess it might be his way of 'explaining' his seemingly homophobic tendencies — the scene does draw a distinction between 'gays' and 'faggots' for whatever that's worth)."

Wow. People who actually live in the city of Detroit are also, apparently, gay-bashing homophiles who crap their way to success in the basement of St. Andrew's Hall. 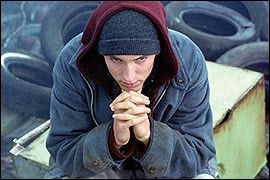 You better lose yourself in the music, the moment…because this screenplay sucks.

Great lakes, Batman! Conan does not air after Leno in Detroit! You'd think that the NBC affiliate in a major market like Detroit would follow suit and air Conan after Leno, but Conan airs when Carson's supposed to air, and you know what airs between Leno and Conan? Jerry fuckin' Springer, three years past his peak. What's up with that? At least Comedy Central re-airs Conan episodes now at reasonable hours so Detroiters don't have to sit through Springer's sorry ass show to get to the good shit.

Local 4 is a great channel…for me to poop on.

White Castle is the Del Taco of the east coast. Cheap food for white trash.

One of the most common violations of comedy is the overextension of a joke.

I have a tendency to beat dead jokes myself.

But a good comedian knows when to stop.

Ahem. I SAID…a good comedian knows when to STOP!

We were at Eric's house and he had some friends over. One of them once ran around downtown Birmingham wearing nothing but a thong and reminded me of vanilla. Anyway, Rory and I were about to leave when vanilla thong boy suddenly fell on the floor, grabbed his head, and started flopping around while repeatedly screaming "brain fart." At first, I thought he was having a seizure, but it soon became clear that vanilla thong boy was trying to amuse us. Unfortunately, his act wasn't very amusing to begin with, made worse by the fact that he continued to pretend-seize and scream "brain fart" for a good two minutes, not once breaking character.

I have a friend who thinks it's funny to say "that's prison lingo, right?" even though anything can be construed as sexual innuendo. Every time we hang out, I hear that line used at least twice and groan on the inside…of my rolling eyeballs. I want to shake her and tell her that it's extremely lame, but see, to her, it IS funny, and around the right people, it can still draw laughs.

The overextension of a joke WILL work if (and only if) both parties find it amusing. For example, in Michigan, I was subjected to a barrage of variations on the line "girl, you a tampon!" While I didn't think this particular viagrated joke was that funny, it consistently elicited some semblance of laughter because the source and the sink of the joke was the same group of people.

Girl, you an enzyme-substrate complex!