What a way to start the biggest movie day of the year.

I arrived at Hollywood and Highland around 5:00 PM and stopped by the El Capitan Theatre to get tickets for Finding Nemo.

"We have a stage show before the movie at our theatre, so tickets are more expensive."

I picked up the tickets and crossed the street to see Shing, who was at the front of the line for the 10:00 PM day-before-opening-day screening of The Matrix Reloaded at the Chinese Theatre. She told me that Warner Bros. was going to shut down the street outside the theatre that night for a Matrix Reloaded stunt show.

We talked for a while and then I headed over to the Egyptian Theatre a block away. I bought tickets for their 05.31 screening of This Is Spinal Tap (Harry Shearer in person!) and then claimed the first spot in line for the first public screening of The Animatrix.

I was about to watch two of the most anticipated movies of the year with two people I met online and their complete stranger friends.

Complete stranger Mexican geek with a Russian name and his girlfriend showed up early and identified the only person in line (who also happened to be Asian) as Jon Yu. I had just finished reminiscing to them about waiting in line for Attack of the Clones next to Elijah Wood (see "Theatre of the Absurd 2") when I looked over at the VIP/Cinematheque members line for the Animatrix screening and saw none other than ELIJAH WOOD.

Okay, this is unexpected, I thought.

I decided to go talk to him.

"Hey, um, I waited in line for Star Wars right next to you last year and I think it's pretty weird that it's mid-May again and we're both in Hollywood waiting in line for the same screening…again."

"Oh I remember you! I knew I recognized you from somewhere!" added the guy who bought the lawn chairs (see "Theatre of the Absurd 2"), who was there with Elijah.

"Anyway, I just wanted to say 'Hi.' I loved The Two Towers! Can't wait for Return of the King!"

You go, Jon. You kiss his ass.

After we saw The Animatrix, we headed over to the Chinese Theatre to get in line for the 1:30 AM opening day screening of The Matrix Reloaded.

Once inside the theatre, we found seats, I sat down, looked around and saw none other than PAUL in front of me, dressed in a black suit with long coattails and a bright green shirt.

I can't seem to escape this guy. Elizabeth attributes my predicament to our shared interest in movies. I don't believe her though. It can't possibly be mere coincidence that he waited in line right in front of me for an Adaptation screening, sat right in front of me at a Better Luck Tomorrow screening and attended the same Matrix Reloaded screening as me. I think he reads this site and stalks me out of spite. Why can't he fuckin' vaporize or something? I really don't need the stress of being reminded that he exists.

"30% of your English 166 grade is a C-, Jon," said Paul, "Doesn't that worry you? How are you gonna get into grad school now with a C- on your transcript? I write for the Daily Bruin. People actually READ my work. You? You're an underachieving English major with a glorified LiveJournal! Bwahahahahaha!"

Before the movie started, I needed to pee and as I was entering the men's bathroom, I overheard someone say that Quentin Tarantino was inside the theatre. I decided to investigate at the urinals. I asked the guys pissing next to me if Tarantino was indeed inside the theatre. They said yes. I asked them where he was sitting. They said in the center about three rows back from the front. I thanked them, flushed, zipped, washed my hands and headed back into the auditorium, intent on meeting Mr. Brown.

I saw (Telcobox) Adam walking my way, grabbed him and told him to come with me.

We made our way to the front and center of the auditorium. I looked around and couldn't see him. Adam saw him.

I looked to his right. No Tarantino.

I went up to him, shook his hand, spoke briefly with him and then [sigh] gave him a thumbs up.

Of all the things I could do or say around Quentin Tarantino, I gave him a thumbs up and remarked, like a total chump, "Cool that you're here, man!" 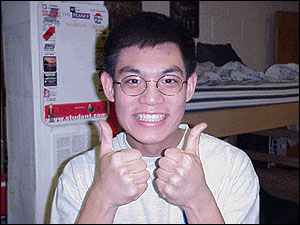 I give The Matrix Reloaded a C-.

The Amazing Adventures of Kavalier and Clay / Michael Chabon