I took a seminar this quarter called The Art of the Interview.

Each person asks him two questions and after we go around the circle once, Pacino's attention will be up for grabs.

No one wanted to ask first. I wanted to sit next to Pacino just to say I did, so I said I'd ask first.

Before Pacino arrived, the professor asked me how I planned to begin the interview.

—What brings you out to Los Angeles?
—No! Don't waste time with stupid icebreakers like that. Jump right in. Give me a question you really want answered.
—Um… Why did you agree to appear in Gigli?
—That's good. Start with that one.

He wore a black suit with a black t-shirt and black leather shoes. Chest hair sprouted from underneath the stretched collar of his t-shirt. White specks littered the shoulders of his jacket. A button on the right cuff of his jacket hung loose, while the left cuff had no buttons at all, only a few dangling threads. Orange gunk stained his shoes.

In other words, Pacino looked like a slob. He was also tired. He couldn't keep his eyes open for the first few questions of the interview. Picture a corpse speaking intensely.

—Why did you agree to appear in Gigli?
—I know Marty [the director] and thought I would do a little bit. That's why.

I expected him to say a little more.

This interview was going nowhere slow, so I moved on to my second question.

—The New York Times' A.O. Scott wrote that The Recruit belongs to "a very special genre: the Al Pacino crazy mentor picture," the sort of film in which Pacino is paired with a younger actor "to enact a peculiar generational battle" in which Pacino's character is "gestural and confrontational" and his younger co-star is "cooler, warier." What say you about this assessment of many of your films from the past decade?

I wanted to get something, anything out of him.

—Do you enjoy being paired with younger actors?
—Not particularly. Don't bother me either.

The girl sitting beside me then asked Pacino about his sense of humor and he spent ten minutes responding.

—What's your political leaning?
—Do you agree with Shakespeare that "all the world's a stage"?
—I have a young daughter. She wants to be an actress. What advice would you give her?
—What does sobriety mean to you?
—Do you think time is linear?
—Can you recommend any restaurants in New York City?

My classmates asked some retarded questions. The same person asked the latter four.

During the open mic round, I asked Pacino why he's never worked with Martin Scorsese.

—That's something I don't know, he added.

Determined to make him talk, I secured the last question of the interview and finally scored:

Do you think you deserved the best actor Oscar for Scent of a Woman?
I don't think that particular film deserved an Oscar for anything. I think I got that Oscar pretty much for my body of work. I was nominated eight times, so I think it had to do with the fact that I didn't get it eight times. It's not about deserving. It's about your time and not your time. Every once in a while, a performance stands out so strikingly that even if there wasn't any competition, they would give it an award — Raging Bull, On the Waterfront. Charlize Theron had a performance this year [in Monster] that cut through. Something like that comes along every seven, ten years though. Mostly it's not about deserving.

Don't you think you deserved to win though for Michael Corleone? You lost both times you were nominated for that role, to Joel Grey and Art Carney, no less.
I hate to sound pretentious about it, but it really didn't matter to me, and it doesn't matter to me now.

What was it like to finally win an Oscar?
It was really different for a couple weeks. You become very famous. Everybody knows that you won this thing. It's like winning the…Oscar. I recommend it to everyone. Like Brando said, they should have a category for every single thing we do. The Oscar for Best Doorman. People should have that. We try to have it on birthdays, where we become special and people tell us "We love you, make a speech." I see why. It's like a party for you.

Here are some highlights of the interview:

on being associated with gangsters:
I was once sitting by myself in a disco in Norfork, England. Why I was there, I don't know. I was just sitting there waiting for someone and there was a drunken English guy looking at me and he was looking for a long time and I looked up at him and he just looked at me and said, "Mafia." Well, you know, if it works for you, whatever. I don't care. I just don't care! Certain roles capture the audience's imagination. Those are the roles you get tagged for.

on The Godfather: Part III:
I hated that hair. It was a concept by a director. I resisted it. Diane Keaton, who was my girlfriend at the time, said, "Al, don't do it, don't do it." It was a mistake. It was the antithesis of what that character was and how I saw him and it offset everything. It's funny how that can do it to an actor.

on languages:
It's amazing how difficult it is to act in another language, particularly when you're dubbing. I speak Korean, for instance. I speak Korean very well. I can mimic it really good. But like Russian, I can't, because the tongue is in a certain spot.

on Tony Montana's mouth:
Did you see the way my mouth looked in Scarface? That was a different mouth than I have. That came from constantly exercising that kind of an accent. I didn't need makeup. I had the mouth.

on playing Tony Montana:
I liked the upfrontness about him, the fact that he didn't contemplate too much, the whole idea of being fearless in that character. I admired those traits in a strange way and enjoyed the experience of living through them. A dog once attacked me while I was playing Montana. This attack dog jumped at me and I bounced it in the snout. I couldn't believe I did that. Normally, I would have just ran for the hills, but instead, I did a little pap on the snout. 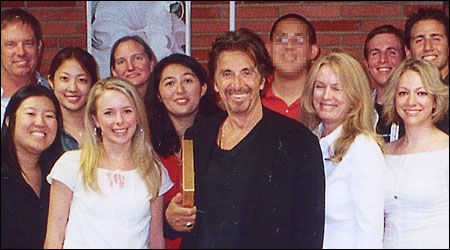 My co-worker Marsha thinks Pacino looks like a cardboard cutout and I look like someone photoshopped me into the image.