Today at work, I learned that my supervisor owns an extensive collection of wigs. He then showed me a website full of graphic photographs of him in drag. Apparently, in his off-time, my supervisor likes to pose as a female cheerleader…without any underwear on.

Also today, a bunch of French teenagers invaded the pool. Those that actually swam curiously only swam breaststroke with their heads above water. One French fuck didn't understand that lanes are for lap swimming and many swimmers (myself included) crashed into him as he meandered about the pool.

As expected, Catwoman was more Daredevil than Spider-Man. I blame it on the director Pitof. Movies directed by people with ridiculous one-word names generally suck.

On the website for The Village, you can download a t-shirt iron-on that says "M. Night Fan." 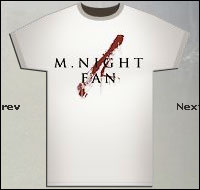 This shirt might be gayer than dressing up as a female cheerleader.