Former WWF superstar Bret "The Hitman" Hart will play The Genie of the Lamp in a Toronto production of Aladdin: The Magical Family Musical this holiday season. 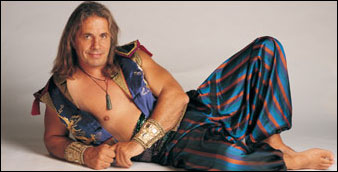 Producers screwed me out of the role in Montreal

Unable to wrestle after Goldberg kicked him in the head, Hart intends to rekindle his longstanding rivalry with Shawn Michaels in a different arena &#151 the arena of embarrassing queerness.

In other news, Avril Lavigne has recorded the theme song for The SpongeBob SquarePants Movie, in theatres November 19. Lavigne's theme will also grace the film's soundtrack, along with tunes by Motorhead, Wilco, Ween and The Flaming Lips.

Guess which bands I just lost respect for?