Very rarely am I hesitant to see a movie, particularly a horror movie, but I'm currently torn over whether or not to see this one horror movie.

The movie is Murder-Set-Pieces by Nick Palumbo (Nutbag), which opened on Christmas Eve in Los Angeles and will open January 7 in New York City.

This is the pro argument:

Moreover, it is the first film ever rejected by all three major film processing laboratories in the United States: Technicolor, DuArt and Deluxe.

Technicolor called the police and the offices of the film's producers were raided by the California Attorney General's office.

This is the con argument: 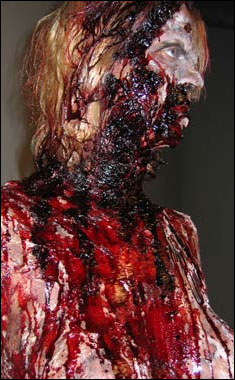 Film Threat:
"Often we wonder when the violence will stop. Surely there must be some way to end the aggressive and unrelenting bloodbath…"

LA Weekly:
"After about an hour or more of this stuff, I couldn't [continue]…"

Fangoria:
"I stopped caring long before the 15th naked stripper had her throat slit in gruesome close-up…"

Do I want to really want to pay money to watch a 100-minute simulated snuff film in a grindhouse theatre? What does it say about me if I do?

I have until Friday to decide.