Anyone read the comic strip Zits?

This was the strip that ran on Tuesday:

The mother finds a wadded-up bill and three socks on her son's bed. Hmmm…

This week on One Tree Hill (which stars TRL co-host Hilarie Burton, among others), Entertainment Tonight on MTV host Maria Menounos' character Jules got married.

My, what a distinguished cast.

Using an anthropomorphic sonogram to sell burgers…maybe not the best idea.

Last fall, I visited a popular gift shop on one of the piers in downtown Seattle. Inside, I saw a device that shapes a hot dog into an octopus. 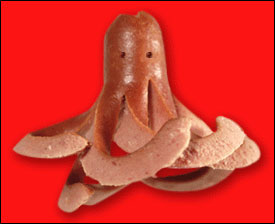 How Octodog's frankfurter converter works (not safe for work).

This gift shop also had a penny press.

I've never understood the appeal of pressed pennies. A pressed penny is cool for like 30 seconds and then it's just a penny you can't use. Granted, a penny isn't worth much, but with enough of them, you can at least buy something. What good is a flat metal ellipse?