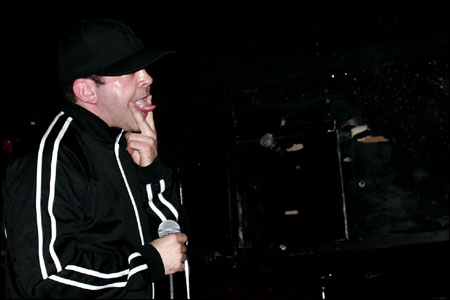 Back from the midwest. Full debriefing shortly. First things first.

A while back, I saw a television commercial late at night for Kidz Bop 7 that featured an audio clip of a Kidz Bop cover of "Float On" by Modest Mouse.

I knew immediately that I wanted to link that song on this site. Unfortunately, a search of digital media resources proved futile.

The following day at work, my boss mentioned that she just ordered Kidz Bop 7 for her six-year-old daughter. My ears perked up upon hearing the news and I asked if I could borrow the album when she received it. She didn't understand why I would want to borrow Kidz Bop 7 but consented nonetheless.

Over the next two weeks, I bugged my boss about the album on a daily basis. "Has it come yet? Has it come yet?" At long last, about a week before its retail release date, Kidz Bop 7 arrived. I took it home that night and ripped the Kidz Bop cover of "Float On."

The track appeared soon after on this site as part of our weekly Play list.

As the week progressed, I noticed an increasing number of links to the Kidz Bop track from random message boards and blogs. Usually, we only make Play list songs available for one week, but I didn't want to spoil the fun, so I decided to leave the Kidz Bop track on our server for another week — enough time, I thought, for it to properly circulate into the file-sharing realm.

A few days later, however, I discovered that three days into March, we had already consumed 3/4 of our monthly bandwidth allowance.

Because of bandwidth issues, I reluctantly prematurely aborted the Kidz Bop track, but it floated on all right.