Rory: Make your way to the Blind Pig.

—Jon and Rory must make their way 3/4 mile to the MC Chris show at the Blind Pig. 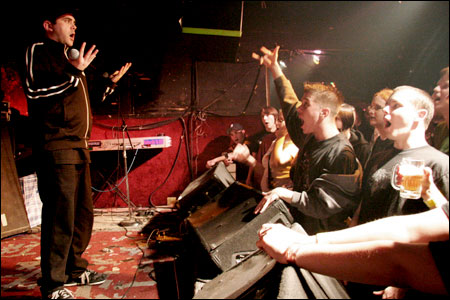 A portly fellow wearing an Aqua Teen Hunger Force t-shirt kept shouting "for shorties" and requests for "I Want Candy." He obviously only recognized Chris as MC Pee Pants. Visibly annoyed, Chris listlessly whispered "I Want Candy" with his back to the audience. 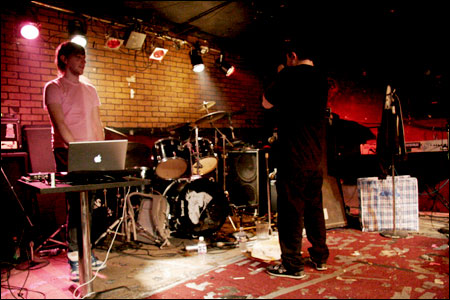 Since California banned indoor smoking in public places in 1995, I've become accustomed to smokers stepping outside to smoke.

Michigan is not California.

With no ventilation inside the tiny club, cigarette smoke stifled me.

I don't understand why anybody would smoke indoors. Cigarette smoke infiltrates all and the aftersmell reeks.

Chris Castle smokes like a wildfire but he at least has enough sense to step outside his (private) residence to light up.

MC Chris inquired if anyone in the audience was from California. A few people hollered back. I was surprised to learn that Rory and I weren't the only ones who'd trekked across the country to see MC Chris live.

In retrospect, those who responded were probably drunk or U Mich students with parents willing to fork over the school's outrageous out-of-state tuition.

In related news, Chris will finally tour the mighty west coast in May! 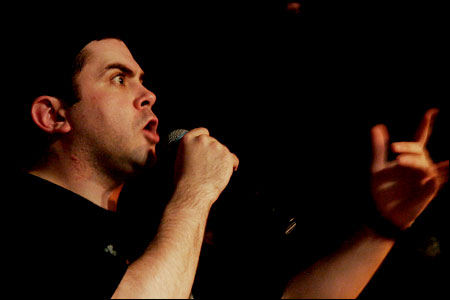 Chris' show at the Knitting Factory will kick off Adam Riff™ Geek Week. More on this later.

Rory: Walk to the next pit stop.

—Jon and Rory must now walk one mile to Tony and Matt's apartment. This one bedroom, one bath abode, in the shadow of the University of Michigan IM Building, is the pit stop for this leg of the race.

—Jon and Rory…you are team number one…again. As the winners of this leg of the race, you have won lunch at BD's Mongolian Barbecue.