day one: little house of savages

Right now, video game enthusiasts are plotting to film and network at E3, opening day for Revenge of the Sith is approaching, and people that I know may be involved in both. I'm Federal Asian Jon Yu, and this is the longest week of my life.

Jon: My fridge is empty, except for a bottle of mustard and a can of beer.

The following takes place between Monday May 16 and Tuesday May 17.

8:30 am
Jon: Where are you guys going?
Jord: Glendale. I need to pick up some equipment. Then we're gonna stop by the convention center to pick up our passes and shoot some expository footage.
Jon: Do you know when you'll be back?
Jord: Not sure. Afternoon?
Jon: All right.

If Joe wasn't so content being low maintenance, I'd have had myself arrested for neglect. He barely did anything all week, happily subsisting within my often sweltering residence on a steady diet of cigarettes, cereal, LiveJournals, poker and…

11:00 am
It's all right
And I put myself in his hands
But I hold on to your secrets in WHITE hou-ses
Jon: Why is this Vanessa Carlton song set on "repeat"?

12:35 pm
Jon: I'm heading down to Westwood with Wilcox for lunch.
Chad: I'll come with. Is there a Meijer around here?
Jon: You lived in Hollywood for a year. You should know we don't have Meijers in California.
Chad: I really want to try Diet Coke with Splenda.
Jon: Diet Coke with what?
Chad: Splenda. It's an artificial sweetener like aspartame only not as cancerous.
Jon: Right. Well, I plan to stop by Ralphs to buy some dark chocolate M&Ms. We can see if Ralphs carries whatever this is your fat ass insists on drinking.

1:20 pm
Chad: I like the taste.
Jon: That's swell.
Chad: I think this should have been called "Diet Coke with Sith." Haha.
[Jon stops walking]
Jon: Okay. What are you doing?
Chad: Whaaa?
Jon: You've never seen a Star Wars film in your life. What's with all the puns? You don't hear me spewing lame jokes about Ghostbusters, do you?
Chad: I'm trying to relate…
Jon: Yeah, well, thanks, but no thanks. [pulls out Ralphs receipt and a pen from pocket] Here's the number for Robot Chicken. Maybe they'll appreciate your comedic prowess.

1:30 pm
It's all right
And it's nice not to be so alone
But I hold on to your secrets in WHITE hou-ses
Jon: Jesus, Joe. This song again?

3:00 pm
Wilcox: How did it go?
Forest: Good.
Tushar: We went by Warner Bros. Studios where Chad used to work. Seeing that water tower was pretty much another dream come true for me. 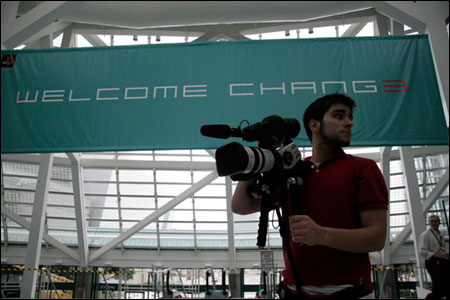 For E3, Sony commissioned teaser signs to promote its PlayStation 3. Unfortunately, they all appeared to read "Welcome Chang" due to poor color schemes. I mean, red on blue? A "Welcome Chang3" billboard I saw on Sunset used a similarly unpopping red-on-pink scheme.

4:30 pm
Tushar: I'd like to go to the beach today. My two goals in Los Angeles are to collect two bottles of sea water and to view a sunset.
Jon: But it's overcast out.
Tushar: One out of two ain't bad.
Jord: I'm supposed to pick up my business cards at 7:30 pm.
Tushar: Where? I'll drive you.
Jord: This print shop near the convention center. Wilcox should come along and pick up his E3 pass while I run my errand.
Wilcox: Good idea.
Tushar: Okay. If we leave now, we can visit the beach and pick up your cards with time to spare.
Jord: Aight.

5:00 pm :: santa monica blvd.
Tushar: Do you hear rumbling?
Wilcox: Yeah. It's coming from the trunk.
Jord: Pull over.
[car pulls over, Jord exits car, cocks gun, signals Tushar to open trunk]
Don't shoot!
Jord: Forest?
Forest: Hi.
Jord: The hell are you doing in the trunk?
Forest: I…I wanted to come along…
Jord: You could have just asked.
Forest: Still, I-I don't feel worthy riding in the company of geniuses.
[pause]
Jord: Get in the car.

5:20 pm
So I go
And I will not be back here again
I'm gone as the day is fading on WHITE hou-ses
Joe: I'm bored.
Chad: Me too.
Joe: Let's rent Smash Bros.
Chad: Sounds good to me.
Joe: Jon, where can we rent Smash Bros.?
Jon: There's a Blockbuster a few blocks away. You can't miss it.

6:40 pm
Chad: We got lost.
Joe: Both copies of Smash Bros. were checked out, so we bought a case of Bud Light instead.

7:10 pm :: six beers later
Chad: Hey, let's play a prank on Jord.
[Chad dials number]
Jord: Hello?
Chad: Jord, it's Chad. Where are you?
Jord: In Tushar's car. We're on our way to pick up my business cards.
Chad: Listen, you need to be back here by 8:15 pm.
Jord: Why? What for?
Chad: We're having dinner with Justin Hall.
Jord: Where?
Chad: BJ's in Westwood. It's not far from Jon's place.
Jord: Why didn't you inform me about this beforehand?
Chad: He just notified me.
Jord: [sigh] Shit. Okay.
Chad: I know how important his participation is to your documentary. Hurry back.
[Chad hangs up]
Chad: Sucka…

7:20 pm
Joe: Excuse me, gentlemen. I'm gonna go piss off the balcony.
Jon: I'm sorry?
Joe: I promised J-Ram I would.
Jon: But it's still light out. Aren't you afraid of anyone se—
Joe: Shhh… Jesus will protect me.

7:31 pm
[Chad dials number]
Jord: Hello?
Chad: Did you get your cards?
Jord: Not yet.
Chad: I thought they told you 7:30 pm.
Jord: They did, but there's a bunch of people ahead of me in line.
Chad: Dammit, Jord! I had to pull a lot of strings to land this meeting for you. I'm gonna look very bad if you no-show.
Jord: Chad…
Chad: Do not fuck this up!
[Chad hangs up]

7:42 pm
[Chad dials number]
Chad: Voice mail again.
[Chad dials number]
Wilcox: Hello?
Chad: Jon. Where are you?
Wilcox: In the car waiting for Jord.
Chad: I need to talk to Jord.
Wilcox: Well, call him.
Chad: He's not answering his phone. I need you to put him on the line.
Wilcox: [sigh] Hold on.
[Wilcox exits car]

7:50 pm
Wilcox: Do you know what's goin' on?
Tushar: Nope.
Wilcox: Chad needs Jord to return soon for some reason and Jord's freakin' out.
Tushar: Hmmm. I'll try to find the fastest route back on the GPS system.

7:56 pm
Tushar: Maybe I could drive on the shoulder of the freeway?
Forest: Here he comes! Running.
[Jord enters car]
Jord: Drive.
Tushar: You want to tell me what's goin' on?
Jord: Just drive. [sigh]

8:10 pm
[Chad dials number]
Wilcox: Hello?
Chad: Where are you?
Wilcox: Stuck in traffic.
Chad: Let me talk to Jord.
Wilcox: One sec.
[pause]
Jord: Yo.
Chad: It's 8:10 pm.
Jord: I realize this.
Chad: I am not losing an industry contact over your poor time management!
Jord: I understand! Tushar's driving as fast as he can.
Chad: Look, I gotta go. Justin's here. I'll stall as long as I can. Don't let me down, for your sake…and mine.
[Chad hangs up]

8:12 pm
Chad: Hello?
Tushar: Chad, what's goin' on here?
Chad: What do you mean?
Tushar: There's a lot of tension in the car right now.
[pause]
Chad: Okay. You can't tell anyone. I'm playing a prank on Jord.
Tushar: What?
Chad: Just play along.
Tushar: Dude, no.
[pause]
Chad: [sigh] Put Jord on the phone.
Tushar: He doesn't want to talk to you.
Chad: Then put Wilcox on.
Wilcox: Hello?
Chad: I need to talk to Jord.
Wilcox: Now is not a good time…
Chad: Please. It's important.
Wilcox: He'd rather not.
Chad: Jon…
[pause]
Jord: What?
Chad: Jord, listen to me! We're not having dinner with Justin Hall. There's no dinner. I've been putting you on this whole time.
[pause]
Jord: Are you fuckin' kidding me?
[Jord hangs up]
Chad: He hung up.
Joe: Ruh roh.

8:55 pm
Wilcox: What were you thinking?
Chad: I intended it to be a harmless prank. Push his buttons a little, you know, and then laugh about it after the reveal.
Wilcox: He was crying.
Chad: [sigh] Fuck me. I'm such an fuckin' idiot.
Wilcox: You knew how stressful this week would be for him.
Chad: Yeah, but…
Jon: Hey, I hate to do this, but can everyone be quiet? It's time for 24. [meta!]

10:20 pm
Forest: Has Joe eaten anything all day?
Jon: I don't think so.
Forest: And how many beers has he consumed?
[sound of water drizzling outside window]

11:55 pm
Joe: JON!
Jon: Yeah?
Joe: Play "White Houses."
Jon: As much as I'd like to, I can't. I'm using the headphones.
Joe: Play "White Houses!"
Jon: I said I can't.
Joe: Please, Jon! I flew out here from Michi—
Jon: All right, all right! You wanna hear "White Houses" again?
[Jon puts on headphones]
Jon: [sigh] Crashed on the floor when I moved in / This little bunk alone with some strange new friends / Stay up too late, and I'm too thin / We promise each other it's 'til the end…

11:59 pm
["stop" button pressed]
Tushar: [whispering] Did you get all that?
Wilcox: Yup.
Tushar: Excellent…