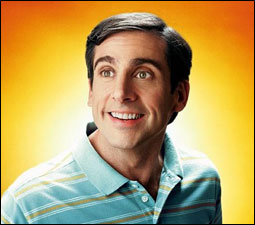 I attended a press screening of The 40-Year-Old Virgin, co-written and directed by Judd Apatow, one of my creative heroes.

The film runs too long and misfires a good number of jokes but is generally entertaining.

Expect all the trappings of an R-rated comedy. I thought the film could have been more outrageous, but the two black ladies sitting beside me evidently thought it was plenty outrageous.

Steve Carell tries to urinate with an erection in two separate scenes. Sadly, neither manages to match the hilarity of the peeing-with-a-boner scene in Me, Myself and Irene.

What sets The 40-Year-Old Virgin apart from standard R-rated comedies is its cultural savvy. Picture a live-action Family Guy.

In one scene, while playing Mortal Kombat: Deception with Paul Rudd, Seth Rogen remarks: "You know how I know that you're gay? You like Coldplay."

In another scene, Rogen advises Carell to approach a female bookstore employee and "be like David Caruso in Jade." I lollered.

Other cultural references include: the reality series Survivor, singer Michael McDonald, "we sell it on eBay" stores, Kelly Clarkson, Everybody Loves Raymond, the film Liar Liar, the band Asia, "Get Ur Freak On" by Missy Elliott and the band The Fifth Dimension. In addition, the Universal film incorporates footage from Universal alumni Dawn of the Dead (2004) and The Bourne Identity.

If you pay attention, you'll notice Steve Carell twice reprise his role as a "German who says nice things" from his days on The Dana Carvey Show.

In one scene, one of the Pakistani gentlemen asks a pregnant black woman, "Is your child on parole yet?" to which the black ladies sitting beside me replied, "Oh that's cold! That's cold…"

I think it's time for moratorium on Desi comic relief.

Office Space, Van Wilder, Malibu's Most Wanted, Bad Santa, Life on a Stick — the crass and/or sex-crazed South Asian spaz character has worn out its novelty.