Well, folks, it was bound to happen, with our economy in the state it's in. 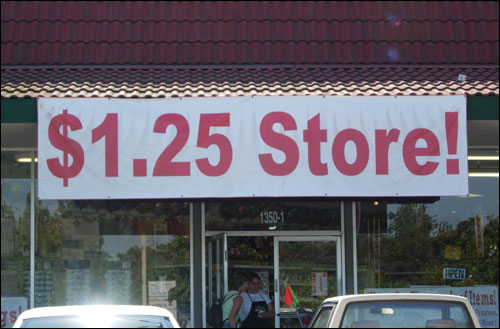 Yup, the local dollar store raised its prices (price?) and, consequently, its name.

I'm not sure I'd announce a storewide 25% price increase via a giant banner.

I felt like a douche bag paying for a sandwich with a $100 bill.

The Black Eyed Peas, Tony Yayo and The Bravery will perform at G-Phoria, "the mother of all video game award shows," on Wednesday July 27. The show, hosted by actor Wilmer Valderrama, will air on the G4 channel on Tuesday August 9.

Upon hearing the news, The Killers promptly signed on to perform at the Teen Choice Awards.

Also: Why would you claim to have spawned the Spike TV Video Game Awards?