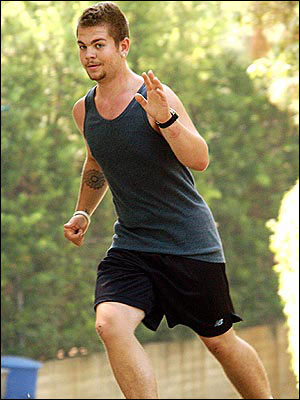 I'll have what Jack Osbourne's having.

I caught the second half of "Date Rape" by Sublime on Clear Channel-owned Channel 104.9 (Live 105 was playing "Wake Me Up When September Ends" for like the twentieth gorram time) and both times Brad sang "even though he now takes it in the behind," an irreverent noise replaced the word "behind," much like how donkey squeals replace the word "motherfucker" throughout the radio version of Bloodhound Gang's "Fire, Water, Burn."

"Even though he now takes it in the [siren]"

I know the official radio version of "Date Rape" doesn't censor the word "behind." Infinity-owned KROQ and Live 105 play the song all the time with both "behind"s intact. This is Clear Channel's doing.

Why Clear Channel would censor the word "behind" but leave the line "he was butt-raped by a large inmate" untouched baffles me.

In development at MTV:

"There and Back" details the potential comeback of former O-Town singer Ashley Angel who is now broke, engaged and about to become a father.