The Onion on the Jenny McCarthy-penned film Dirty Love:

A local paper ran a cover story on Sudoku.

Hundreds of newspapers and Web sites are publishing it.

At Borders bookstores, Sudoku is dominating the best-seller list with six of the top 10 titles.

Am I supposed to believe that a logic puzzle is sweeping the nation? That Sudoku is to America what Chavs are to Britain?

I can understand solving puzzles to pass time during a commute or lecture, but buying compilations of them suggests mental illness.

"Any plans for the weekend?"
"Funny you should ask. I just picked up the latest Sudoku book. Itchin' to dig in."
"Ah…"
"I'm-a be like Russell Crowe in A Beautiful Mind."
"Right."
"More Ovaltine, please!" 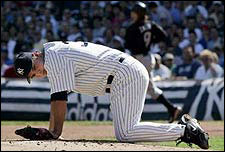 "My grandbaby is going to be 2 next month, if we make it."

Johnson was concerned about Rita and the threat that Port Arthur could be inundated by a massive storm surge, but she said she was more worried about getting caught in a traffic jam or at a squalid shelter like those in New Orleans after Hurricane Katrina.

Hope Willey, 39, declined a bus ride out because it would not allow her to take her dog along.

I bet these people would willingly appear on Maury to learn "secrets" of their lovers. [pause] No one ever questions Maury's lie detector.