1. UNTITLED BOB SAGET PROJECT (HBO) – Bob Saget has set up a new comedy at the pay channel about a divorced dad who works as a gynecologist in Phoenix and struggles to balance raising his 14-year-old son and his active social life. Saget will star, co-write and executive produce the project.

If only he had three daughters instead of a son.

2. I attended Resfest on Saturday at the Museum of Contemporary Art, during which time two Hindians wed upstairs.

3. Who the hell gets married at a museum?

4. To my dismay, I missed a screening of a shorts program that included Dimmer, a short film commissioned by the band Interpol about three blind teenage boys roaming the industrial neighborhoods of Buffalo, NY. 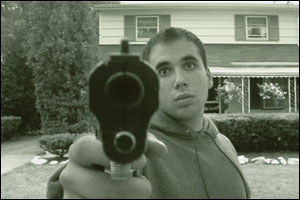 Stop, or Matt McKernon will shoot!

5. I caught this, however: "Creation" by (Australian creative collective) The Glue Society

6. FX ordered a 13-episode second season of It's Always Sunny in Philadelphia. Sweetness.

9. Who at ESPN thought Lou Holtz would be a good on-air personality? He's like Dubya with dentures out. Teaming him with Rece Davis merely accentuates how unintelligible he is.