As Snakes on a Plane footage circulates the Internet, let us not forget the adult-themed parody of March of the Penguins written and directed by Bob Saget.

The player's full name is Randal Falker. Yes, his name is Randy Falker, like the joke in Meet the Fockers. 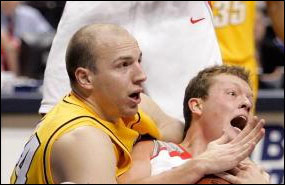 No way Greg Brunner (left) was born in 1983. I mean, look at him, he's balding! He looks like he could be Matt Sylvester's (right) father.

Not shown on screen during the Washington vs. Illinois game: Jay Bilas' thunderous erection for Brandon Roy.

Mike Jensen out of context:

Coach patted me on the butt, looked me in the eyes and told me that he needed me. Right there, I didn't care about anything else in the world. [source]