Some of you may remember my disastrous interview with Al Pacino. What I didn't mention is that the professor also considered asking Kiefer Sutherland to be the celebrity interviewee. I would never trade Pacino for Sutherland, but damned if Kiefer wasn't the more fascinating candidate. 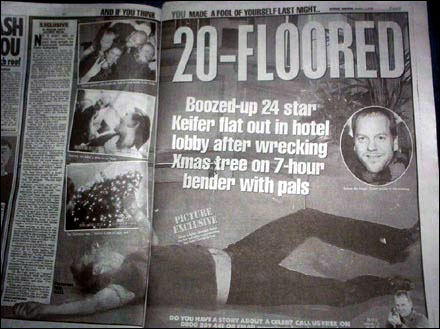 That was then, this is now:

"Want to go out? I'll take you on the subway. That's how I get around."

"According to tabloid reports, he downed eight shots of J&B Scotch at a bar, stripped off his shirt and gyrated topless before lap-dancing on a guy's knee."

"Avocado used to freak me out, I've never liked cheese, and runny eggs make me want to ralph."

"He often chooses not to wear underwear."

"He has never, ever tried to quit smoking."

"He once heard that some college-going 24 fans had developed a drinking game in which you have to down one shot for every time Jack Bauer says, 'Damn it.' So during one episode, in one scene, he took it upon himself to say 'Damn it' three times in a row. 'By the end, there had to be fourteen 'Damn its.' And I could just see all these college kids going, 'Oh, fuck!""

"I remember the first girl I slept with. She was seventeen, I was thirteen. I remember leaving her house after we'd done it, like, seven times, and I remember skipping to the bus stop, going, 'I've done it seven times.' And I was literally skipping."

[from Kiefer Sutherland: Heart of Darkness]

"I've had 180 stitches in my head, and a couple of years ago I broke my wrist and went to get an X-ray. They said they saw something in my elbow. It was glass. The doctor wanted to open my elbow to remove it, but I said, 'No, it's fine. Leave it there.'"

"I did like the ceremony, the ritual of preparing cocaine as much as doing it. I did it for a year, loved it and then stopped. I feel the same way about cooking now."