At the supermarket today, I realized exactly what bugs me about the Hawthorne Heights video currently in rotation on MTV. 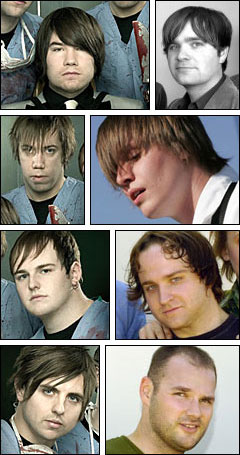 different names for the same thing

The band looks like Death Cab For Cutie by Hot Topic!

In addition to the above images of Hawthorne Heights, the cover of the latest issue of Alternative Press boasts this:

I like how it's "exclusive!," as if there was a bidding war.

Steven Spielberg will be part of Zhang's team as an artistic adviser. [source]

Artistry is not Spielberg's forte though. I wouldn't describe any of his films as very artistic. Moreover, the director of Hero and House of Flying Daggers probably doesn't need artistic advice.

Seems to me that the Chinese government hired Spielberg for the sake of hiring Spielberg.

"Who produced our Olympic ceremonies? Oh, only history's most successful director!"

Erna has brought in guitar wiz Nuno Bettencourt (Extreme) to play on the track. [source]

Penned by the lead singer of Korn and sung by Angel, the Mindfreak theme song is hilariously bad as is. Now Nuno freakin' Bettencourt's involved? Man…

Remember when news that broke was important?

+ Something Wild for Papelbon
+ Puppy-Pipe Emergency!
+ This is a real photo: