A number of non-governmental organizations have warned that up to 60,000 women from eastern Europe could be smuggled into Germany by criminal gangs to work as prostitutes during the [World Cup] tournament that takes place in June and July.

Prostitution is legal in Germany, where some 175,000 women are already involved in the sex trade. [source]

Not to judge soccer fags fans, but 175,000 prostitutes isn't enough?

The 2004 United States Census estimated the population of Lincoln, the capital of Nebraska, is 236,146, just slightly more than the potential number of prostitutes in Germany come June.

When up to 60,000 people are involved, can you still smuggle? Hard to be discreet importing that many women. The criminal gangs should march their whares (eh?) into Deutschland under the guise of "A Day Without Prostitutes."

Every time I see this movie ad on the side of a bus, I think: 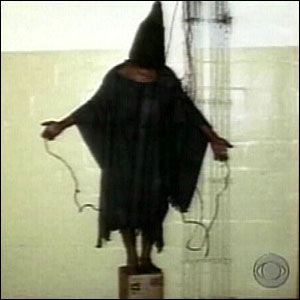 2008 US Presidential Mock Draft
"Downside: Maybe too racially insensitive even for white Republicans; the guy had a noose collection."

Improv Everywhere Mission: Best Buy
"Get a large group of people in blue polo shirts and khakis to enter a Best Buy."