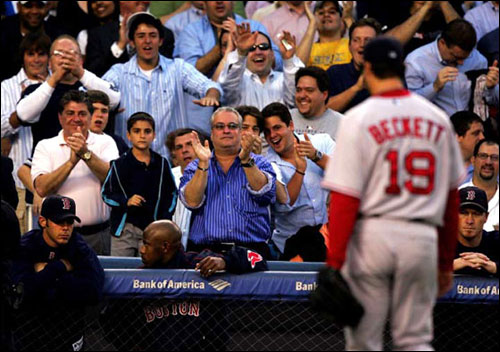 What's with all the dress shirts? And why aren't any women present?

Attempting to capitalize on the ever-increasing ratings of Fox's American Idol, this summer, the other three major networks will flood the airwaves with imitations.

Nothing Americans do better than drive successful ideas into the ground (see: "Lazy Sunday").

Seriously, this singing competition shit is out of hand! In Chicago, both a furniture store (Walter E. Smithe) and a car dealership (Gillespie Auto) staged Idol contests.

The One: Making a Music Star (ABC)
description: "Follow the lives of contestants as they attend a music academy that turns aspiring singers into music stars through professional training. Each week, contestants will perform live for the American audience, who will have to vote to keep their favorites in the competition."
sounds like: American Idol + Making the Band
judges: the contestants' coaches
the hard sell: Alliances, romances and rivalries will all be part of the story!
verdict: Is to a pop idol competition what Grey's Anatomy is to a medical show. No surprise that it's based on a Spanish television smash hit.

Master "No, I don't think I can dance" P is developing his own answer to American Idol. According to Yahoo! Music, Master P is currently shopping America's Next Hip-Hop Stars, which will offer its winner a recording contract and $50,000. Some potential guest judges already lined up include Snoop Dogg, Paul Wall and Romeo. [source]

Oh, the indignity of receiving negative feedback from Romeo.

+ Magazine Threatens To Sue Bloggers Over Pitt-Jolie Photos
What's wrong with this picture?
1. People threatens to sue bloggers for posting photos of a baby
2. People paid $4.1 million for the rights to photos of a baby
3. people honestly care about seeing photos of this fuckin' baby