5. Robert Iler ("A.J. Soprano," The Sopranos)
His acting's gotten better with age, but he should probably enjoy the role while it lasts. 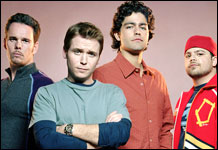 One of these things is not like the others…

The episode "Back in Black" is Clark's tour de force.