So Jon Theodore quit as drummer for The Mars Volta.

Maybe I don't attend enough concerts, but Jon Theodore is far and away the most talented drummer I've ever seen perform live.

Whoever lands his services should consider themselves very lucky.

Perhaps he can join Modest Mouse.

How did The Punisher Kills the Marvel Universe slip past me unnoticed?

The premise is simple: What if Frank "The Punisher" Castle's family were killed in the crossfire of a superhero battle in Central Park? Instead of dedicating his life to eradicating crime and punishing criminals, Castle dedicates his life to wiping out superheroes. 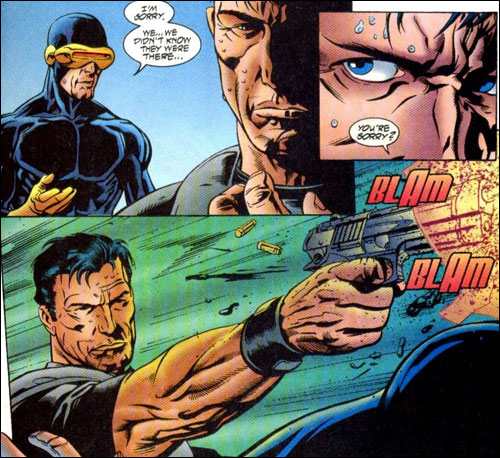 This should be the premise of The Punisher 2, not another crime boss crusade. Think Snakes on a Plane!

Who wouldn't want to see Thomas Jane taser Tobey Maguire in a sewer or stab Ben Affleck in the chest with a combat knife?

Besides, Homeless Dad Kills the Marvel Universe doesn't have the same ring to it.

+ Amazon.com: Reviews for Whole Milk, 1 Gallon
"I am glad Amazon included multiple photographs of the milk jug in question from imperceptibly different angles. I had my doubts about buying this milk, but those photos put my mind at ease."

+ How To Stuff a Mouse
"(Disclaimer: If you find this objectionable, please post negative comments below and don't forget to include your e-mail address so that I can call you a pussy in a more personal manner)"