In anticipation of you know what, this week, we salute our favorite snakes. 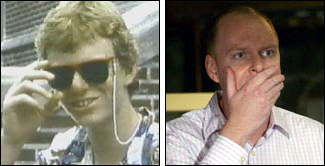 I missed the first wave of Degrassi completely, so I shall defer to AJ:

"In the early days of Degrassi Junior High, Snake was a metal head! (he even wore vintage Iron Maiden t-shirts). The lead guitarist of The Zit Remedy, Snake wailed and played his heart out for the band."

"In Degrassi High, Snake was best known for discovering the suicidal corpse of Claude. After skipping out on class to take a relaxing leak, Snake enters the bathroom..notices blood all over the floor and calls out to the stall; 'hey buddy are you all right?' NOPE the person inside was not all right.. needless to say Snake suffers emotional trauma, and skips school for an entire week."

In the second wave of Degrassi, Snake teaches "media immersion" to the same students every year. Thus far, he's had a new laptop stolen while battling leukemia, and he's succumbed to a mid-life crisis, kissing the school principal in front of his stepdaughter after seeing a Kevin Smith movie.

They shared an interest in motorcycles.

The sixth season of Degrassi: The Next Generation premieres (a month before Canada!) September 29 on The N.

Taking Back Sunday will guest star in Craig's episodes.