In anticipation of you know what, this week, we salute our favorite snakes.

The fifth and final: Jake "The Snake" Roberts 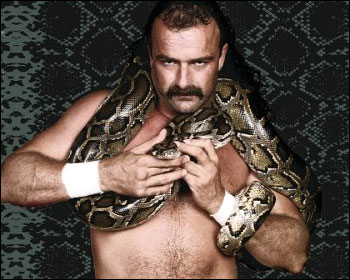 Jake "The Snake" Roberts was a World Wrestling Federation superstar in the 80s. After the Honky Tonk Man injured Jake's neck with a guitar at WrestleMania III, Jake began using painkillers and wound up addicted to crack.

In the 2000 documentary Beyond the Mat, a wrestling promoter says Jake demands crack before doing a show. Jake later smokes crack on camera.

Among Jake's more auspicious achievements:
— he invented the DDT maneuver (by accident)
— he directly inspired the term "Austin 3:16"
— he guest starred on an episode of Boy Meets World

In his heyday, Jake would bring a python named "Damien" to ringside in a canvas bag. After executing his finisher, he would dump Damien on his opponent's body.

In 1991, Earthquake "squashed" Damien and used the snake's carcass to make "Quakeburgers," which he fed to Lord Alfred Hayes. 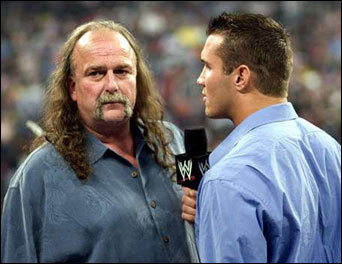 In March 2005, Jake (as David Crosby) appeared on WWE television for the first time in eight years to have his legend killed by Randy Orton.