This month, Nathan Jones can be seen in not one, but two martial arts films.

In The Protector, in theatres Friday, he plays an enforcer whom Tony Jaa needs elephant bones to eliminate. 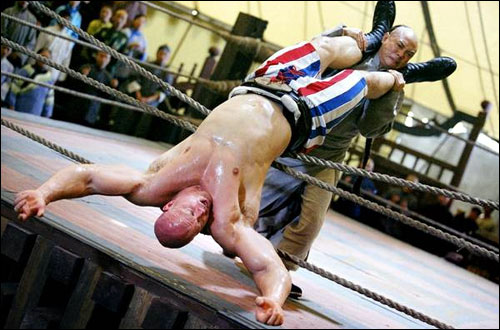 In Fearless, in theatres a fortnight from Friday, he plays a condescending American wrestler whom Jet Li defeats and wins the admiration of.

So who is Nathan Jones?

Like many Australian celebrities, Nathan Jones spent time in prison before gaining notice.

While in prison, Jones discovered the sport of powerlifting. After his release, he became the National Powerlifting Champion of Australia and later, Australia's Strongest Man.

In the late 80s, Jones reportedly began lactating out of one nipple, a side effect of steroid use. 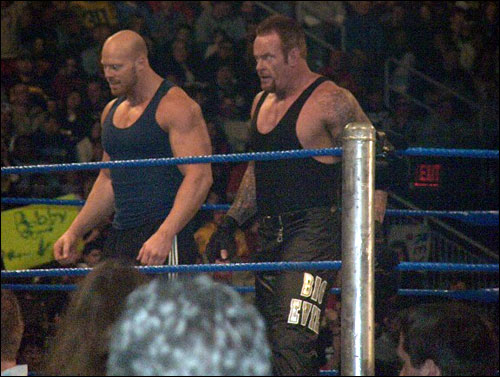 On February 27, 2003, Jones debuted as the Undertaker's protégé on World Wrestling Entertainment's SmackDown!.

What does Jones do as soon as he gets out there? He goes for a spinkick on A-Train that misses by about three feet and he stumbles onto all fours when he tries to land it. Everybody was just laughing at him. Jones had to redo the spot.

Jones never endeared himself to wrestling fans, nor could he handle the rigor of WWE's work schedule.

On December 6, 2003, during a WWE tour of Australia, Jones abruptly quit. Somehow, nobody noticed that he had packed all his belongings for the trip.

Since then, Jones has found success in cinema playing intimidating jobbers.

In addition to his roles in The Protector and Fearless, Jones played the character Brad Pitt disposes of handily in the opening of Troy.

He will next appear in The Condemned, an "action thriller" starring…Stone Cold Steve Austin. Jones plays "The Russian," which, coincidentally, is also the name of the character wrestler Kevin Nash played in The Punisher.

+ Ugly Betty vs. Suchin Pak
+ The Craigslist Experiment
+ American Idol's Kevin Covais sings "Baby Got Back"
+ Uwe Boll to fight the webmaster of Something Awful?
+ Pastor indicted for raping a church member under the guise of casting out demons