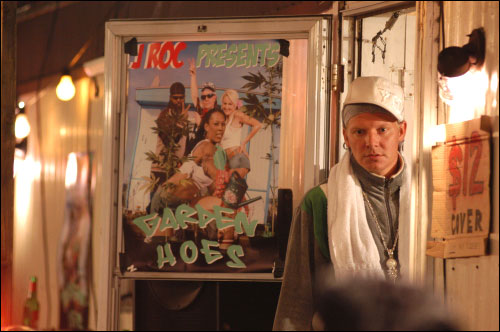 The Trailer Park Boys movie opens next Friday in Canada. I'm flying to Detroit and crossing the border just to see it on opening weekend. I'll probably come to regret doing so, but I've survived poorer decisions. Like majoring in English

In addition to Rush, The Tragically Hip, Alexisonfire and other Canadian bands, the soundtrack for the Trailer Park Boys movie features songs recorded by its characters.

Speak of the devil…

On Saturday, Kiefer Sutherland will hold a public Q&A session in San Francisco. The catch? It's after a screening of a documentary about the band he manages, or managed. Not exactly 24…

The Simpsons' 400th episode, due to air next May, is a spoof of 24 titled "24 Minutes." Kiefer Sutherland and Mary Lynn Rajskub will guest voice as Jack Bauer and Chloe O'Brian, respectively. [source]

Simple Plan already did it!

I saw a man buying a pumpkin today. A little early for that, no?

I want one of Subway's high-speed toasting ovens for Christmas.