1. Two guys from Lakehurst, a rival school, crash a party at Emma's house.
2. Jay and Spinner kick the Lakehurst guys out.
3. J.T. leaves the party to talk to Liberty.
4. J.T. catches one of the Lakehurst guys peeing on the left side of his car.

J.T.: Couldn't find a toilet?
Non-peeing Lakehurst guy: He did.
J.T.: Ha ha. You guys slay me with your humour.

5. Non-peeing Lakehurst guy pulls out a knife and stabs J.T. in the heart.

Evidently, the perpetrator is really sensitive about his comedic ability. 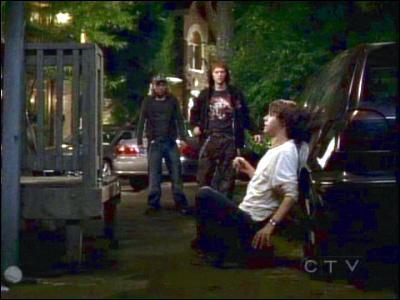 Why does non-peeing Lakehurst guy (center) look so surprised? If he didn't intend to seriously injure J.T., he could've just beat him up instead of, you know, STABBING HIM IN THE HEART.

Previous episodes established antipathy between J.T. and a few Lakehurst kids, but the two Lakehurst guys crashed Manny's party to party, and J.T. didn't exactly invite a stabbing outside. 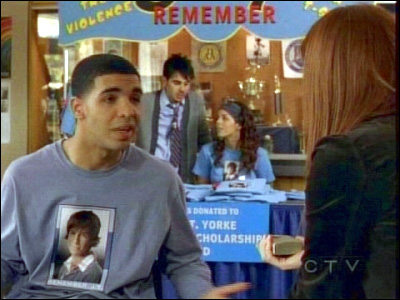 I didn't design these shirts! Honest!

Why couldn't the producers kill Ellie? At least reduce the increasing omnipresence of her insufferable character. 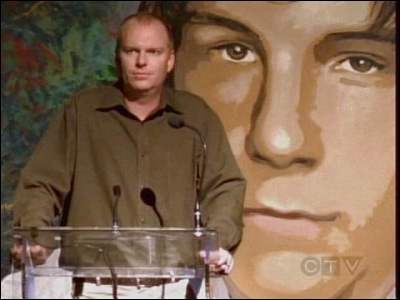 Ryan Cooley's now studying theatre at the University of Toronto. I hope he learns how to cry convincingly.

Degrassi's Ryan Cooley Talks About the Death of J.T. [The TV Addict]