Apparently, "gong show" is slang for "an event marred by confusion, ineptitude and shenanigans" and not, you know, a reference to a game show hosted by Chuck Barris.

Fact: A football game always spikes the ratings of whatever programming follows, no matter how disparate their audiences are. More people will watch an episode of The Amazing Race simply because a football game precedes it.

The Late Late Show episode that followed Super Bowl XLI drew the largest numbers in the show's 12-year history, and it aired after Criminal Minds and local news, over five hours after opening kickoff.

Sloth? Apathy? Lepers? An explanation for this phenomenon eludes me.

I denied a homeless person money today because he was wearing a USC hat. Total Belichick move, I know.

They are sending out advance copies of the People's Court style TV show "Redneck Justice" where Brian Knobbs plays the judge. It should be on the air soon.

I suppose if boxing referee Mills Lane can be a judge, so can a Nasty Boy. 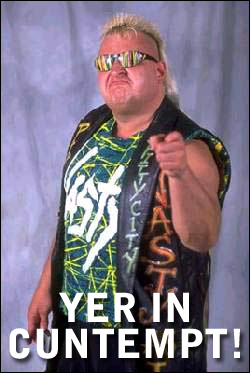