Bonus: The many "mmmmm"s of Rachael Ray

Rumors are flying that a musical is in the works based on The Flaming Lips' album Yoshimi Battles the Pink Robots. Reports suggest Aaron Sorkin may be involved. [source]

Break out the 'shrooms!

Interesting tidbit: Sorkin did rewrites for the movie The Rock.

"It's going to be unbelievable," says Eric Stafford, 26, of Iowa City, Iowa, who will drive to Detroit for the first time for WrestleMania weekend. "I'm looking forward to the show and checking out the city, the nightlife." [source]

To be fair, he lives in Iowa.

Who would win in a fight: Krang or Meatwad?

Apropos of nothing, Google returned this image for "Meatwad": 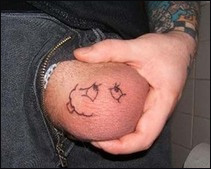 Dick Enberg wrote a play about Al McGuire. The one-man play will be performed in Atlanta during Final Four weekend. [source]

Dick Enberg wrote a play about his former broadcast partner? Oh my…

I guess John Beilein was busy.