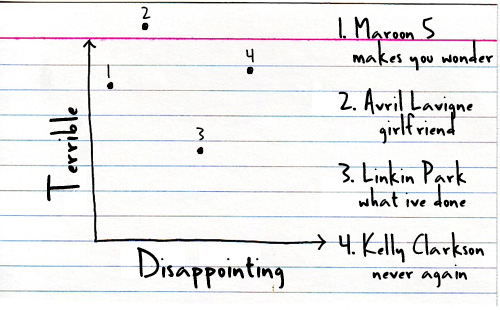 Linkin Park is the Blizzard Man of rock.

• Bono and The Edge will (reportedly) be involved in writing the songs for a Broadway musical about Spider-Man.

• The soundtrack for Shrek the Third includes a duet between Eddie Murphy (as Donkey) and Antonio Banderas (as Puss in Boots) on Sly and the Family Stone's "Thank You (Falettinme Be Mice Elf Again)."

The album also includes Led Zeppelin, The Ramones and a cover of Heart's "Barracuda" by Fergie.

• Ben Lee is collaborating with Mandy Moore, Benji Madden of Good Charlotte and Sara Watkins of Nickel Creek on his next album.

I wish him the best of luck opening for Fall Out Boy this summer.