Fall Out Boy is going to Uganda in July to help raise awareness about the conditions there.

"This ain't humane, it's a god-damn dis-grace!"

Remember when Sum 41 visited the Democratic Republic of Congo to document its civil war?

It's like the more money pop punk bands come upon, the more problems they see — in Africa.

I caught Fall Out Boy on Leno last night. Patrick's neck fat is out of control!

Holding the directional pad down for 10 minutes so Mario can run in a hamster wheel and earn 10,000 rubees is not fun.

Neither is fighting 20 "sammer-guys" one-on-one consecutively.

I miss the days when all you had to do was reach the end of a level.

"I play video games cuz I don't wanna read anything. Why didn't they take that into consideration before they inserted an entire fucking novel into the game?

Oh – and that whole space level? That was bullshitty too." 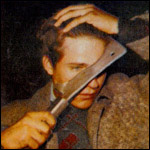 Anyone know what movie this image is from?

A: Friday the 13th: The Final Chapter