ABC picked up Carpoolers, a comedy starring Jord's buddy TJ, for its fall schedule, which means TJ should probably start auditioning for other roles, because ABC is where comedies go to die.

Also picked up by the Alphabet: Cavemen, a comedy based on Geico auto insurance commercials.

Meanwhile, Fox negated its pick-up of The Sarah Connor Chronicles, a continuation of Terminator 2, by renewing 'Til Death and adding a comedy starring Kelsey Grammer and Patricia Heaton.

On Thursday, expect Fox to announce that it has also picked up Alzheimer's and osteoporosis.

One of the Simpsons sitting on their couch and one of the Silver Surfer currently congest my local cinema.

2. Bruce Willis on iChat with Ain't It Cool News readers.

3. A ad for the NBA playoffs that compares players to the Fantastic Four and the Silver Surfer without any mention of a movie title or release date.

I remember seeing a similarly odd ad for last year's playoffs that compared players to X-Men.

Saturday Night Live is in a quandary because it doesn't have an actor to spoof Barack Obama. [source]

Hey, Chris Rock jumped from SNL to In Living Color…

I heard a DJ on Live 105 assert that the Beastie Boys don't play instruments.

No wonder he works weekends. 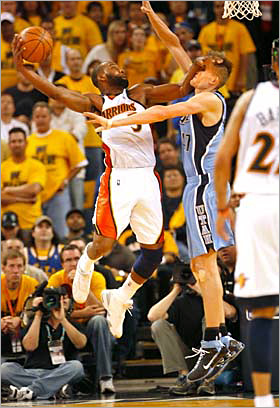