Buena Vista's president of distribution Chuck Viane reported the top three [North American theatres for Pirates of the Caribbean: At World's End on opening day]: the Salt Lake City area's Megaplex 17 at Jordan Commons with $120,696 and Megaplex 20 at the District with $120,073, followed by Hollywood's El Capitan with $118,009. [source]

Two theatres in Utah in the same city and one theatre owned by Disney.

Imagine if Disney made a movie about Mormons. Pioneers of the Salt Lake Valley: Deseret Man's Chest.

A group of teenagers arrived in a Hummer limousine. For Pirates of the Caribbean.

A group of young men arrived in elaborate pirate costumes with full pirate make-up. To see a movie.

The Cinemark cat reminds me of Bubsy.

20th Century Fox and the Franklin Mint have created a Silver Surfer U.S. quarter that has been put into limited circulation in advance of the release of "Fantastic Four: Rise of the Silver Surfer." [source]

We are very, very protective of the currency of this country. Our goal was to enhance the coin," Franklin Chairman Moshe Malamud said. [source] 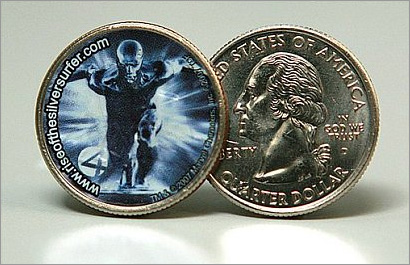 Give Fox points for creativity, but WTF4! This is actual currency!

The tails side looks like something you'd see on a beverage cup at Burger King.